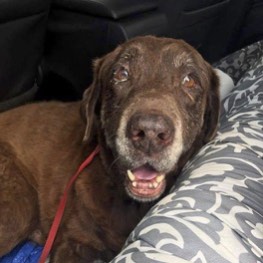 A funny thing happened on Abraham’s arrival at his foster home with Tara and Pete…
He is such a very old man, he’s got a lot of problems, but he came into their home, slept and slept, and slept, and fit in seamlessly with their two Labs along with Blackberry/Ruby. They contacted us and said that they wanted to just have him live his life out with them, for however long that may be.

So here’s Abraham in his new life, as you can see he now has light in his eyes, he’s on lots of good pain medication for his arthritis and life is just very, very good for him. 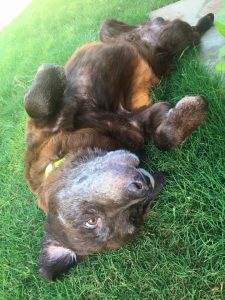 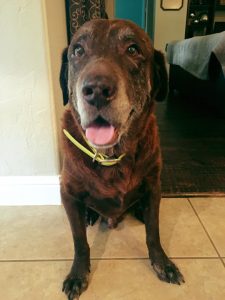 This beautiful, sweet brown bear was dumped by his owner for being too old. It’s an all too familiar situation that breaks all our hearts as we love these dogs like family. His coat is such a mess, matted and it needed to be brushed out badly. He was covered in ticks, thankfully they gave him a nexgard at the shelter so they were all dead just needed to be scrubbed away. I brushed him all out and scrubbed him clean, he smelled so very bad. The transporters told us that he knew exactly what getting in a car was and was excited to do it. It tells you that he certainly rode in the car with somebody in his life before.
He’s a very sweet old man, I have no idea how old he is but he was so asleep this morning that I had to work at waking him up for his appointment with Dr. D. 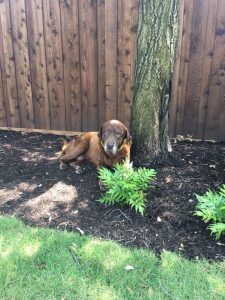