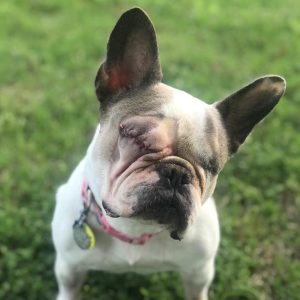 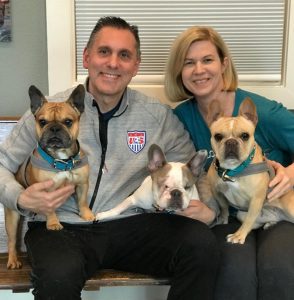 This was quite an adoption and one that had the new family crying their eyes out before they even met her. Her two new sisters waiting patiently for her to come through the door. Shannon and Mike Skonieczka made the drive from Carmel, Indiana to Texas once again. This is their third time to adopt from Dog Ranch Rescue. They previously adopted Viviana (nka Iris) and Rachel (nka Mabel). Today Anne Bonny was the lucky girl. They applied for Anne Bonny right away and were not one bit deterred that this little girl didn’t have any eyes. Life has been very, very hard for this sweet girl but not anymore. Shannon feeds her dogs a raw diet and she even bakes homemade pumpkin treats for her pack. Anne Bonny’s new name will be Margot and she will want for nothing, and Iris and Mabel will be her eyes to help her adapt to her new home. We wish all of them a very long happy life together

About Anne Bonny:
This girl has some serious problems and we were asked if we could help yesterday so I will dig in and tell you her story as we know it right now. I’m told she was in a shelter and was pulled out by a person who had a friend that was going to take care of her. The problem is the dog has some serious expensive medical issues that need to be addressed, and the person who had her had no ability to offer her that. First of all she has one eye, and has lost one eye for reasons that are unknown to us, but secondly the eye she has she cannot see out of so she is blind. The next problem is she has a slight head tilt and she is sick and hasn’t eaten or drank water in 4 to 5 days. We said we would take her and had her taken to the ER last night, the ER doctor felt like she could have vestibular disease but of course we cannot rule out an inner ear infection, we cannot rule out a brain tumor, they gave her medication for nausea but it didn’t matter she still won’t eat or drink. We knew this morning that we had to transfer her to the ER in Lewisville where neurologists are on staff. She’s most likely going to need an MRI to find out what is happening but right now we are waiting on just the consult with a neurologist. They are slammed over there so we are waiting our turn. In the meantime she is hospitalized on fluids so we can feel more comfortable about that. This girl is as cute as can be, she is only 3 years old and we are hoping that we can help her and get her as healthy as possible. We know it might be a struggle to place a dog like her that is blind but we also know the village is a powerful thing so we will just wait and see about that.

I will update you as I learn more, in the meantime welcome to Dog Ranch Rescue Anne Bonny

UPDATE 5/16/2021
Anne Bonny is learning how to move about with Cassandra’s dogs. Thankfully she can hear and she does move towards Cassandra’s voice. Cassandra said she sleeps all night in her crate and has never had a potty accident in the house. She takes all of her meds in her pill pockets. She loves affection and she even tolerates the dogs in the yard playing and acting silly. Cassandra thinks her being able to hear again is fairly new since having both of her ear drums cut open to drain all of the infection and pus out which was causing her to be nauseous and dizzy. She said when she gets nervous or can’t find you she goes around in circles while she tries to figure this out. We will be doing an ultrasound on her this coming week to determine if she is spayed or not as the information she came with was conflicting. Ideally we find a special needs home for her sooner rather than later, we would love it if she learned to find her way around a home we would like it if it was her forever home. Right now she’s learning her way around Cassandra’s home but we know once she’s adopted she will have to start from square one again.

Anne Bonny is about 2 or 3 years old and other than being blind and recovering from double inner ear infection she is in good health.

UPDATE 5/13/2021
I need your attention for a moment to talk about Anne Bonny because I don’t think we have ever had a dog that has had such a terrible time with her health and the long term affects it will have on her life forever. She is only 2 or 3 years old. Found herself in a shelter and when we stepped into the equation, all we knew is she hadn’t eaten or drank water for 4 days, she had nystagmus in her one eye, she had clearly lost one eye already and we don’t know why. She was dizzy, nauseous and suffering with neurological symptoms. The one eye she has doesn’t work and she is completely blind. We started with her at the ER to get her fluids and help with nausea while we tried to figure out what was next. We ended up transferring her to Blue Pearl ER because she needed a neurologist, Dr. Ducote stepped in and sent her in for an MRI and we discovered that she had a bi-lateral inner ear infection making this sweet girl miserable and causing all of her neurological symptoms. Dr. Reno got on the phone and got a pretty fast appointment with her to see the dermatologist and they performed a myringotomy on both ears which means they cut her ear drums open and drained out all of the pus and infection to ease all of the discomfort and nausea. The MRI was sent to a radiologist to determine what had happened to her eye and he said her retina was detached and she needs to then go to the Eye Institute. Yesterday she was taken there and Dr. Eng called me and said this poor girl has pressure building in this eye that she can not see out of and it really needs to be removed. So today Cassandra drove her to the Eye Institute to have her eye taken out leaving her with no eyes. The dermatology report said they didn’t think that Anne Bonny could hear but Cassandra said now that she has had the myringotomy in both ears she can now hear. To think this poor girl who is completely blind would be deaf as well was just too much so we were so relieved to find out that yes she can hear.
Cassandra said this poor little girl is struggling with being moved so many times, from place to place, hospital to hospital, procedure to procedure and she’s in a home where she’s never been before, she can’t see, she has been feeling terrible, and she has no choice but to just deal with it. Cassandra said she now has the most adorable head tilt when you talk to her and with some encouragement she is beginning to feel safe enough to walk on a leash a little bit.

Needless to say we need a very, very special adopter for her, someone who accepts her limitations and understands her plight. This is not the dog for just anyone to apply for and we will wait to find one that will be perfect for her. Clearly she needs a calm home, it would be nice for her to live with other dogs who could help lead her, but mostly she needs a compassionate human who will love her and help her do the best that she can.

Let me give you the update on Anne Bonny, we had her hospitalized at Blue Pearl where Dr. Ducote the neurologist took a look at her and we decided that she needed an MRI, she is blind in the eye she has, she does have nystagmus in that eye and is a little unsteady on her feet with clearly a neuro issue affecting her balance causing her to be nauseous and in general just not feel good. We sent her for an MRI and the results show that she has a bilateral inner ear infection that is causing all of it. She will be put on medication to combat the infection and is on medications to make her feel less nauseous but it will take time to clear up this infection and stop the neuro symptoms. The report on the MRI about her eyes was that it was unrelated to the inner ear issue and it appeared that her retina was detached. Next stop will be the Eye Institute to get more answers about that.
Cassandra has taken her home to foster and try and make her feel better while in a home in smaller surroundings that she can get comfortable in as she cannot see.
I will update with more as I learn it. 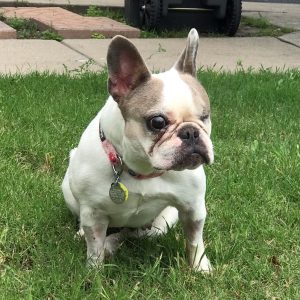