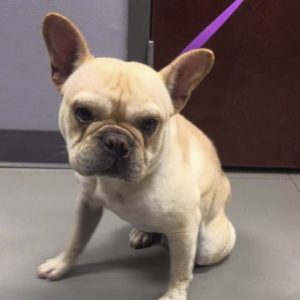 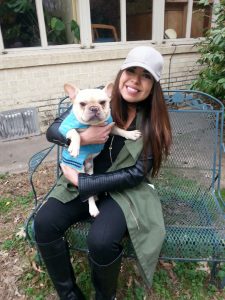 Atticus Finch was left behind in a cold stinky auction house because he didn’t sell. We were contacted about him and Boo Radley to see if we might purchase them and get them out of there otherwise they were going to sit for a month until the next auction.
We jumped on the opportunity, we were told by volunteers that Atticus was very upset, very nervous and was lashing out at all other dogs. He was sent to Dr. Larsens for neutering and vetting and he has been there the whole time. In the past few days he has finally begun to decompress enough that he actually started to enjoy the company of other dogs. He just needed time to get through his anxiety.
We received a fantastic application from Victoria Garcia in Ft. Worth Texas explaining that she fell in love with him the minute she saw him. We looked at her app, and I instantly knew that she was going to be his new mama. Everything was perfect, vet references, home video’s and everything she told us in the application. Atticus would be an only dog which we felt was necessary at least for now and that’s exactly what he will be.
Victoria had ordered him this adorable teepee long before he was ready to go home but today was his big day. Victoria drove out to Dr. Larsens office and picked up this little boy to take to the life he needed from the very beginning.
We wish him the happiest life ever.

Atticus Finch was left behind at a mill auction when his reserve price was not met, he was going to stay in the auction house for a month until the next auction. We rescued him from there, he was very shook up and very emaciated. He needs some time to decompress and feel safe and when we feel he is ready we will try and determine what kind of home he needs. Atticus Finch is 2 years old.