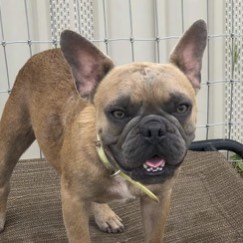 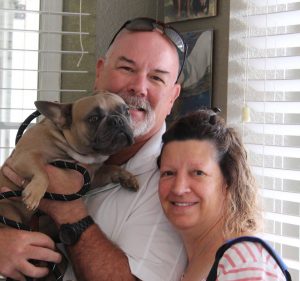 Little man August met his mama and daddy today.  Jeff and Paula Johnson from Tooele Utah flew out to pick up this little guy. August is a shy little man and needs some comforting and his big dad Jeff couldn’t hug and hold him close enough to reassure him. Jeff and Paula recently lost their Jack Russell Griff from kidney failure and their other dog Brian who is a Boston Terrier has been lost without him so they were ready to bring home a new friend.
August has some anxiety about being in a crate but Jeff works from home so he will have lots of time with him to help him grow up to be a big confident boy. We are hoping he will do okay in the two flight home, and I’ve instructed them to take full advantage of a flight attendant who is a dog lover to take him out of the crate if it will be tolerated for even a second.
August will keep his name as Auggie and we know that he’s in great hands and will be just fine.

The Rescue responded to a “surrender” of dogs by a backyard breeder in South Texas in July. These dogs were all roaming out on this man’s land, a man who is being charged and tried for animal abuse and neglect. Our wonderful transporters brought home this Month-themed group. The conditions of all of these dogs were appalling, pitiful. This boy pup is no exception.

He’s ten months old, we have no paper work on any of them so it’s a guess. He has giardia as well as skin and ear infections but he is getting good nutrition and love, and the best medical care there is.

Welcome to the Rescue, August! 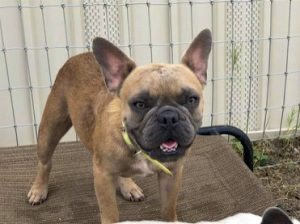