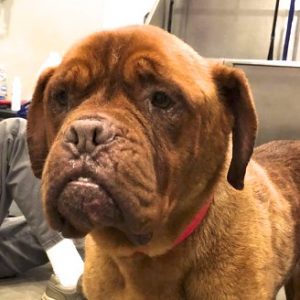 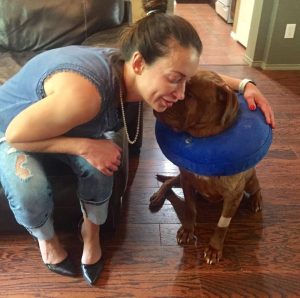 It’s a very special thing to be able to rescue senior Bordeaux’s especially seniors that have surpassed the average life expectancy of the breed. We just recently rescued both Bridget and Babe, age 9 and 10.

Babe was already spayed when she came to us but she is Heartworm positive and needed to have entropian surgery, interesting enough when we took her for that the surgeons told us that she has previously had entropian surgery on her eyes because the scars were there, meaning somebody at some point in her life loved her before she ended up with the man that threw her and Hubba Bubba outside to live. The surgery she had before was not done well and we needed to correct it because her lids still scratched her eyes. She had her surgery on Tuesday and did very well. She will have Heartworm injections in about a month.

We received excellent applications right away for both of these sweet old girls and asked their adopters if they would rather take them sooner rather than later and help by taking them for their future medical appointments allowing them to get all the time they can with these older girls. They of course were thrilled to help.

Babe had her adoption last night at Trav’s house. Lesley Nelson from Dallas, TX. is Babe’s new mama. Her husband is retired and home during the day and Lesley works from home. They have two English Bulldogs named Buster and Billy and have wanted a bear of their own for quite awhile. They thought starting with a senior bear would be best for them.

Travis said that Babe was very excited to see her which is a bit rare for her as she’s kinda dry girl that doesn’t show a lot of emotion. She had lots of wagging her tail and it was like she knew this was her mama. They are going to keep the name Babe or Baby not that she came with that name but its the name that we gave her for her new life and her new life is now underway with her forever mama who says she’s going to spoil her so much and is going to take her shopping at Neiman Marcus 😂

We are so happy for this girl, what a ride these last few weeks have been for her but it’s all good from here on out..

Babe had lived for 9 years on a concrete slab with shade only in the afternoon and crappy green water. Finally a power company guy turned them in and the owners surrendered them. Nobody could see them where they were at. Babe is heart worm positive and as sweet as can be.

Kelly has picked up Babe and is on her way to Texas. She said she is a sweetheart. 9 years old and lived a life of neglect and hell, what I would give for my Bordeaux’s to live to 9 and to see this is heartbreaking.

The man who turned in the owner of both of these dogs were told stopped to see them but didn’t know Hubba Bubba had passed. He’d been bringing them roast beef every day. The shelter manager hugged him and thanked him for doing what he did. Before he left he hugged her and was crying which made her cry.
That owner was more concerned about who turned him in then about his dogs, and said he didn’t abuse his dogs.

All we can do now is focus on this girl and get her healthy and find someone who will love her like shes never been loved before.