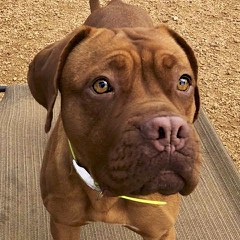 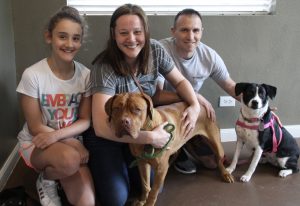 We finally found the happily ever after for Babs. She left for her new life with her new family. Such a shy girl who was in danger of being euthanized in the shelter because she just didn’t show well to adopters. She has rarely if ever wagged her tail but shes come a long way while staying with us for the past 4 months.
Her new family Keri and Jeremy Smith from Mansfield TX came and met her and were so happy that she did so well. They have rescued a dog in the past that they couldn’t touch for 6 months… so Babs was doing very well for them, allowed them to pet her and love on her and she will come around more and more as time goes by.

We couldn’t be happier for this sweet shy girl and the entire family that will love her forever. <3 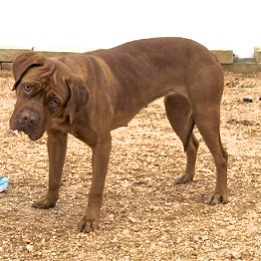 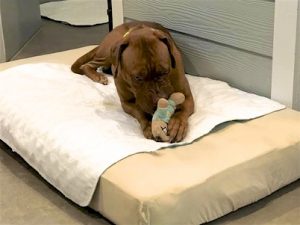 I want to talk about one bear that Laura is struggling to find a good match for, as all of the others will depart in the next few days..

Babs was a stray in a shelter that called us and said can you come and take her because she’s terrified, shut down and will be euthanized because a dog that behaves that way doesn’t show well to people coming into the shelter to adopt, and she will not be chosen and her time will run out..

We tagged her, spayed her and treated her for the heartworms she was sick with. Babs is suspicious of people but she’s come along way, she will not greet new people with a happy wagging tail, she will not be warm and receptive, but I can tell you she does approach us now for petting. She gets along with all dogs and is really a pretty rambunctious dog when it comes to playing with other dogs, her and Carol Danvers and Bellatrix wrestle non stop, but in a couple of days they will all be gone to their forever lives.

Babs doesn’t have a family and here’s what we need, an understanding family, similar to Witchy Poo, to Pumpkin, to Thelma and to Candy Corn but not as severe socially as some of those. As I’ve explained before many of these dogs are socially damaged and they need a family who is patient and understands that they are going to do the best that they can do.
She’s a young dog probably around a year old and will get better and better but somebody applying for her needs to understand her and accept her.

If you think you might be that family applications can be submitted online at dogranchrescue.com

Someone from the shelter down in Corsicana emailed us about this girl telling us this info:

“We have a young female Dogue that needs rescue asap.
She is about a year old, good with other dogs. Hw positive and appears to have a yeast infection in her ears. She is super timid and won’t make adoptions here.
– Corsicana Animal shelter”

We immediately tagged her and went to work on getting her out.

Dogs that are very shy like her do not show well in a shelter because they seem unfriendly and people don’t choose them that’s why they said she won’t make adoptions there and she would most likely not make it out alive.

We were getting ready to take off for CA yesterday when we were thinking of a name for her, they announced our stewardess’s name on the flight was Babs and I loved that and said that’s it, that’s her name. Laura told our stewardess Babs and she was honored.

So we welcome to Dog Ranch Rescue, Babs

Update:  She’s just a pup but unfortunately she never was taken care of and she is heart worm positive, she will be having treatment soon and once that’s finished she will be able to be adopted.