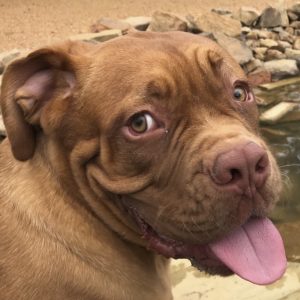 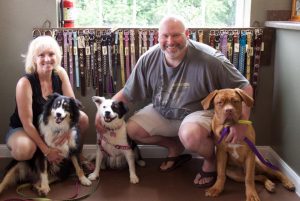 Basher came to us a few weeks ago as an owner surrender seeking a new home for him because he was being abused by another dog in the home.

He’s just a pup at 7 months old but he’s a big boy, a very sweet boy who anyone would be lucky to have. Belinda Alley adopted Jellybean/Jenny quite a while ago, her and Michael arrived at the Ranch to drop off Jellybean/Jenny and her brother Jake for a few days while they went out of town. Michael has wanted a red bear of his own for quite sometime and they asked if they could meet Basher and we said of course.

From what I understand it was pretty much love at first sight, they had concerns that Jake and Jenny would tolerate a new addition, they get jealous and offer a fuss so we had Wes and Travis both work with them on corrections, and behaviors that shouldn’t be tolerated. They went home with loads of tips and a big baby red bear and they are just in love with him.

Belinda reports that they have made tons of progress in the home with everyones behavior and they plan to stick with it and have a very balanced pack that includes this baby bear.

He will live in Odessa Texas and his full name shall be….

We were contacted by the owner of this pup looking for help with his rescue. She has had him since he was 8 weeks old and loves him dearly but she has another dog in the home that is very reactive with him and has been starting fights with him and he is responding negatively back at her.
It was a very tough decision but she felt that he was placeable but the other dog wouldn’t have any opportunity for someone wanting to adopt her with the behavior she demonstrates so they reached out to us to take this big pup and find him a new home.
His name is Basher and he’s 7 months old and weighs 80 pounds. He’s somewhat unsocialized, and we will work with him on other dogs, and lots of people touching him.
He’s just a big sweet baby who needs experience in life, and we will for sure be seeking out a home who will understand this and will have a trainer at the ready to help continue the work that he needs.