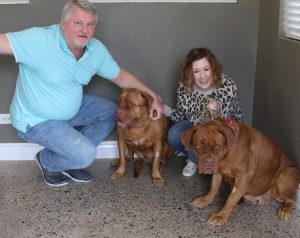 We have a huge afternoon of adoptions happening today. I will begin with the adoption of Bentley and Broom Hilda. As you can see they are being adopted together by Kelly & Bobby Rothwell who adopted our former foster Big Earl. Earl recently passed away and Kelly and Bobby really wanted to have two dogs this time so Broom Hilda and Bentley are the lucky dogs that will be spoiled rotten by the Rothwells.

They are fully versed on the differences between Bentley who has lived his life as pet in the past but Broom Hilda has only known life as a mill mama and is very shy and has no clue what human affection is or if she should want any part of that. Bentley will certainly be helpful for her to adjust and the Rothwells are completely on board with showing both of them a great life and we look forward to seeing how she advances.

Bentley will keep his name as Bentley and Broom Hilda will now be called Bella.

Off they both went to live their life, we wish all of the the best

A lady in Cameron, TX saw an ad listing Bentley as free and need gone ASAP and was immediately concerned because she didn’t want him to end up in the wrong hands.  He was listed as a 5 year old male neutered Dogue de Bordeaux.  His mom moved and didn’t take him with her and her kids couldn’t keep him so they wanted to rehome him immediately.  He was said to be good with kids and other dogs and his name is Bentley.  Jennifer brought him home and we arranged to have Kim Foster drive down on Saturday to pick him up.  As Jennifer was leaving to meet Kim Bentley got away from her and was lost in Cameron, TX.  Jennifer and many others searched for him to no avail all day Saturday.  On Sunday there were sightings of him and Ricky Barnes drove down and spent the day looking for him and giving out his contact information to everyone he met.  About 11:00pm last night Jennifer was contacted that he was spotted and she went out to look for him and he wouldn’t come to her and ran off into a bushy area.  She went back this morningto try again and he was standing on some rail road tracks and had his foot caught in the track.  She was able to catch him and head home with him and we have Neal Beaty and Ricky Barnes making a plan to go and get him and bring him up to us at the Sanctuary.