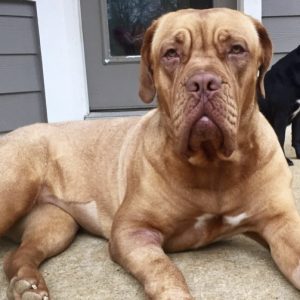 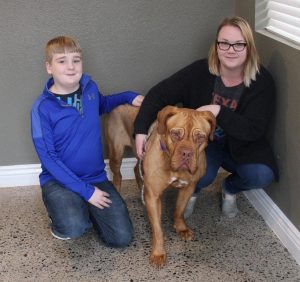 Bernadette has been in our rescue for a year, she came to us out of the shelter after being hit by a car with damage to her foot that required multiple surgeries and months and months of rehabilitation. Travis has dedicated hours, weeks and months of his time into this big girl.

She was adopted the first time and was in a home with a Bulldog who began to beat her up and she was returned after living there several months. She was then adopted to a second home living with another Bordeaux and suddenly they began to fight, she lived there for 4 months and was returned.

We didn’t even announce the return, instead we all just felt the dread and the punch in the gut. It’s so very hard to work and work, and work to get everything right, to rehabilitate a dog and to fail twice is very difficult.

The impact it makes on the dog is life altering, to jump from person, to family to another person and another family changes a dog and Travis was very upset about it.

He threw his hands up in the air and said she obviously has to be an only dog, never mind the fact that she has lived with Travis and 5 other dogs with no issue.

Finding an only dog home is hard, it’s very hard, but very shortly after her return an application came in looking to adopt that had no other dogs in the home. The applicant was the sister of one of our previous adopters and they just recently moved into their own home and wanted a dog to join them.

Travis called them himself to discuss and felt like this would be a good option for Bernadette, the home has a young boy and a toddler and Bernadette had a toddler in her first failed home that she adored so we knew that would be a plus.

Emily Seay from Lake Charles, Texas drove in today to pick up this big girl, she was so excited she couldn’t sleep last night and has always been a lover of big dogs and Bernadette is a very big dog. Her name shall remain Bernadette and they know that she will require patience as all of this change really does a number on a dogs head.

Travis has stated that if this home doesn’t work out for any reason we will never attempt to place her again she will just stay with him and he absolutely doesn’t want to add to his pack but it doesn’t matter. Bernadette is a priority and this has been tough on all of us but mostly Bernadette and Travis have paid the price.

Today Bernadette is on her way to her third home and we need all the thoughts and prayers possible that it will be her final landing place.

When we rescued sweet Bernie he was in the shelter with a female Bordeaux that we tagged to rescue as well. Before we picked them up, she was adopted out. We were later contacted by the shelter that this beauty had either been dumped or escaped from her adopters and apparently been hit by a car, did we still want her? Absolutely!

She is about 105 but she’s emaciated at that weight, ideally she will weigh about 115 to 120. Who knows how long she had been running before being hit by a car and limping along the freeway. She’s very heavy boned and I would guess she’s between 1 and 2 years old. Her cast is very, very cumbersome covering her entire leg and her entire foot, it’s difficult for her to maneuver and I’ve ordered some XXL dog boots to put over it to keep it from dragging outside getting filthy. She’s to have limited movement with no running and no jumping.

Travis has taken her home and introduced her to his pack, she’s inexperienced with other dogs and was afraid of Daryl who is a wildman. After an hour or so we had everyone calmed down and she was quietly sleeping on the kitchen tile floor where she preferred to be. He says she is a very good girl. We are happy to also report she is heart worm negative!

She will stay with Travis where she will heal and get good food and love. Right now she’s resting and is happy to have a belly full of cheeseburger and fries…

Welcome to the Ranch, Bernadette.

As we were talking yesterday about why dogs that are adopted fail in their new homes, let’s discuss why Bernadette finds herself back at the Ranch returned.
Does it have anything to do with Bernadette?
The answer is no, the problem lies with the Bulldog that was already in the home. He began with trying to push her around, she tried to avoid him. The owners tried to get control of him because they loved Bernadette, she is a sweet girl and was so good with their toddler but the Bulldog continued to snipe at her, push her and Bernadette wasn’t going to take it anymore and began going back after him and it became clear that she couldn’t stay. He simply had too much control in the home and Bernadette was a problem for him
Travis went into the home a couple of times to try and give them the tools they needed to keep him in check but sometimes its more than people can do and we decided this wasn’t a good place for Bernadette and she is now back with Travis at the house of red bears.
This big girl has been through the ringer, you might remember she was at the shelter with Bernie, and she was quickly adopted out to someone she shouldn’t have been released to before we got to her. She then got away from these people and was hit by a car causing serious damage to her foot and once again was back in the shelter where we retrieved her and started the process of her healing.
She has had two surgeries, long lengthy rehabilitation for months and months and was finally ready for adoption but this just wasn’t the right place for her and now we begin the process of looking for a new home.
She still has a little bit of a limp and always will be she is a healthy, big girl who is looking for a new place to call her own. 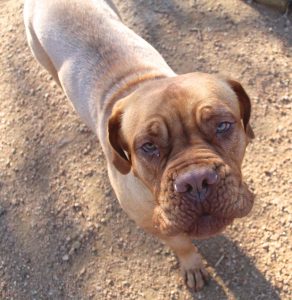 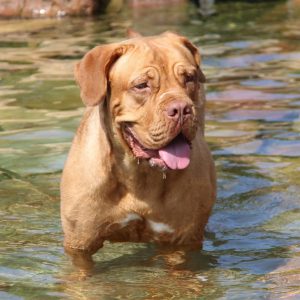 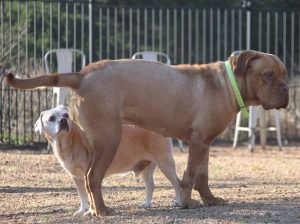 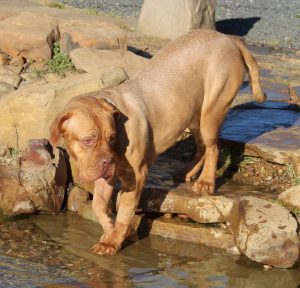