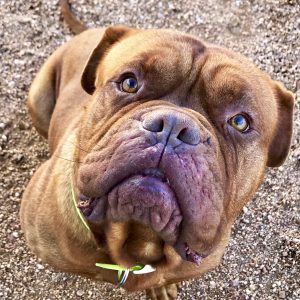 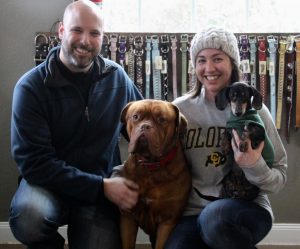 It’s time to make Bernie’s adoption official. Jon and Nicole who previously adopted Meyer the wiener dog who was a stray in Houston, have always been intrigued by the Big red bears so when we needed a foster for this big guy we reached out to see if they wanted to give him a try. Of course, after fostering this guy myself, I knew they were dead in the water and he wasn’t going anywhere. Jon and Nicole have been doing a fantastic job with him being diligent in keeping up with his training to make sure he would remain the sweetest boy ever. This guy tugged at my heart because he reminds me so much of my Dwayne that passed away, but I know I couldn’t keep him, and I also know he will be loved and cherished everyday by his new parents. His new name will be “Mortimer Bernard Kramer” and will sometimes go by Morty or Mort. Oh, and by the way.. no one can babysit him but me… I’m the godfather now. -Travis

We were made aware of him as a stray that was picked up and taken to Dallas Animal Services. We tagged him and the female he came in with right away and waited for the stray hold to be lifted. The female was adopted but this boy was picked up by our volunteer and brought to the Sanctuary last night.

He’s about 100 pounds and appears to be in good shape. He was neutered in the shelter and we are helping him along with pain meds and anti inflammatory medication. We have him in the isolation room due to being in the shelter and will watch for upper respiratory infection. He is a dreamy boy, very sweet and loves love. Travis and Julie kissed that shiny lip a whole bunch of times for all of us who would love to.

He will be examined by Dr. Reno on Monday but for now he’s safe, clean, fed and happy. 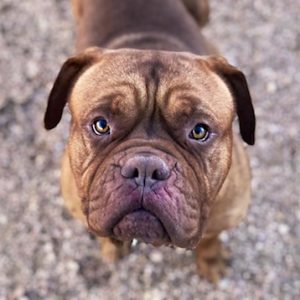