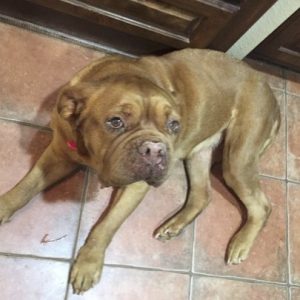 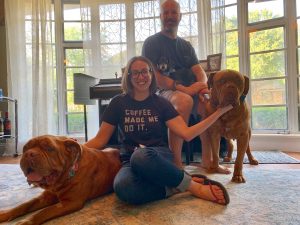 As soon as Bridget was announced on the page having been rescued from living outside in a home where her mom moved away and left her, Trav’s friends Jon and Nicole Kramer contacted him about this sweet girl, never mind that she’s 10 they still wanted to meet her. Jon and Nicole previously adopted Mr. Mortimer Bernard Kramer (Bear) aka Bernie and Mr. Oscar Meyer Kramer (Weiner) aka Mayer and wanted to see about adopting Bridget.

They came to Trav’s house to meet her and that was it, they wanted her to join their family. They purchased her flowered collars and tutu’s from what I understand and this week she finished with her spay and dental and went to live with her new family. They are in love as you can see by the numerous pics they have sent us. Her official name is Bridget “Bridgy Bear” Kramer and she will never be abandoned again.

Bridget is precious, and sweet and is so very happy to be rescued.