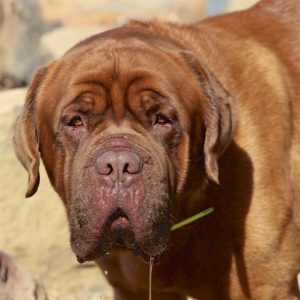 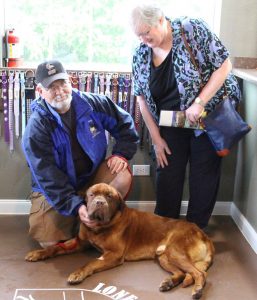 Bronx was a stray in Weatherford which is about an hour or so south of us. Nobody came for him, he was adopted out to a young person with a lot of kids in the home and they brought him back because he growled at a child.
We then went to work on getting him out of the shelter and bringing him to the Ranch. He was terrified of men and wouldn’t come anywhere near them. Travis went to work on him with pizza and turns out Bronx is a big foodie and was eating out of his hands in just a few hours. We have worked with him continuously since then and today he was ready for his adoption.
Donna and Keith Tong from Walbridge Ohio applied for Bronx for their 40th wedding anniversary present to each other. He will have a Newfoundland brother and an English Mastiff for a sister at home. Keith and Donna’s daughter is a veterinarian so they are a home filled with dog lovers.
I took the introductions slow with Keith and told him to keep his hat on and allow Bronx to meet him just as he was. He was instructed to not talk to him, not look at him and not reach for him. Out came Bronx into the waiting room, he wagged his tail and said hello to Donna, he smelled Keith and stayed calm and wagged his tail a little bit. After we talked for a bit I handed Keith a pill pocket and had him just lower it to his side and the nose came alive, Bronx came over to have a treat and we repeated, repeated and repeated.
After about 5 minutes they were best friends and as you can see Bronx loved a good belly rub too.

They loaded us up on treats from Ohio, which we were so excited to sample (except for the Hawaiian rolls), we know who those are for

His new name shall be Cagney and he could not have landed in a better spot.

We wish all of you the happiest of days ahead 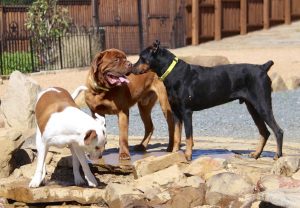 We had been aware of this big boy in a shelter in Weatherford for about 2 weeks now. We had started to go to work on, he was a stray, and was on stray hold. After the hold was up he was adopted so we moved away from him needing help.

While I was out of town we learned that he had been brought back to the shelter by his adopter. The story was he was adopted by a woman in her 20’s and she lived in a house with a lot of people and a lot of kids and he was overwhelmed and he growled at an 8 year old in the home.

We of course need to be very cautious when accepting a dog into our rescue especially a huge Mastiff but we also have to take all information and sort out who the dog is and what he’s responding too.

Upon arriving at the Ranch it was clear he was fearful of Travis but not the women, he was timid and somewhat fearful so we had to work on that by allowing the other dogs at the Ranch to help him learn that men aren’t bad and let them help socialize him. You see dogs learn social skills from other dogs and when you have a dog who is afraid of humans, whether it’s men or women, or both the fastest way to rehab a dog like that is to have other dogs who aren’t afraid of people teach them that its okay. They lead by example if you will and the more dogs that are “balanced” and unafraid the better off they are and the faster they learn.

This morning while Travis was working he brought him out and let him feel the pack, and in just a short period of time he was wagging his tail and following their lead. Travis cemented the deal by bringing in a little bit of pizza. This boy loves to eat and after just a little while he was eating out of Travis hand. He loves the other dogs and is now main streamed and doing just fine. It turns out his little growl for the child and for me when he met me for the first time was just because he was frightened. He’s a very sensitive boy and will be just fine.

He’s been neutered, he has a skin infection and an ear infection, he will need a dental and some more time at the Ranch to help him become the best he can be and that’s just exactly what he will get.