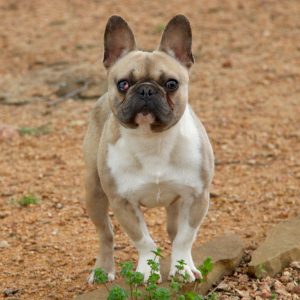 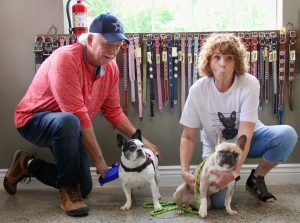 Jan Pairsh and Larry Sawyer from Lakewood, Texas have been waiting for Bubba to be well enough to finally go home, he will have a Frenchie for a sister named Petunia. Jan is retired and will have tons of time to give this happy little man the life he deserves. I’m told his name shall remain Bubba so we wish them a very happy life…

As I stated before this little man was a stray in Little Elm Texas, he was found in a neighborhood, he has been posted to lost and found sites and he has been reported to the shelter in that community. He had no identification on him and he has no microchip and nobody has come forward for him and it appears that nobody is looking for him.

I haven’t been at the Ranch since working full time on the cookie business but Travis reports that he is a fabulous little man, he’s funny, playful good with all other dogs, he doesn’t soil his den at night, he isn’t neutered yet but he doesn’t bother the girls there in the least. He’s just a swell little man.

We are just moving forward with announcing him as our rescue after doing our due diligence with no luck. He will be scheduled for neuter, he needs to see a specialist about his eye that appears to not only have a cherry eye but it appears to be a non functioning eye that may be congenital we will see if removal is what he needs or if they think maybe he has some vision with it, I’m just not sure at this time.

So with that let me introduce to you, and welcome to Dog Ranch Rescue Bubba