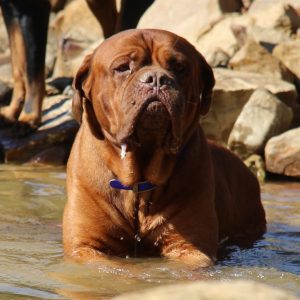 Adoption Pending
Age: Adult
Breed: Dogue de Bordeaux
Sex: Male
Weight:
Kids: Not Tested
Cats: Not Tested
Dogs:
Fenced Yard:
Location: Anna, Texas
Special Needs:
About Burt:
We were contacted by a family a couple of weeks ago. This big boy’s mama was very ill with Covid and in the hospital, they needed help with him, shortly after they reached out to us his mama passed away, and the wheels went into motion.
Here is what we know and what we are told, he is not neutered, he was born in 2015, they said he lived with a female dog but didn’t get along with some male dogs in his history, ( not surprising with him being intact) He is protective of his home and people coming there, (pretty typical for a Bordeaux)
Mr. Ricky Barnes drove a few hours out to go and pick him up today and he was shy with Ricky but warmed up. Travis and Wes took him in to the ranch and he very much needed a good flea bath. He is very itchy, his paperwork shows that he is HW positive and it looks as though they maybe couldn’t afford to treat that so we will take care of it.
Travis said he is very shy and he sat with him next to the tub for a while before putting him in, after Travis got him all scrubbed up and his fleas removed then he decided Travis was his friend and sits very close to him. I went over to meet him and he is too shy to come say hello, I got a tiny bit of a tail wag but clearly he is very timid, and needs some time to figure this all out. He will have the lounge to hang out in as he takes time to think about what his new life will be. We cannot say at this time what kind of home he will need for obvious reasons. Travis made him a nice bed in the lounge and he has the option to go outside or to stay inside whichever he prefers. As we give him time, we will give him some love and attention and eventually he will be friends with all of us.
His name is Hercules and I don’t think I need to explain to you why we will never have another Hercules in our rescue so we will call him something similar. His family called him Herc just like we did with our big Hercules.
For those reasons we are just going to call him Burt, it rhymes and sounds close enough for him to respond perfectly to it.

So with that I ask you to welcome to Dog Ranch Rescue Burt.

When Burt first arrived of course we had to take our time with him introducing him to numerous dogs. All of that is behind him now and he is mainstreamed with everyone without issues. He has always had a big interest in the pond but couldn’t make the plunge. He has now adapted and knows that he is best suited for the shallow end where he can just have a nice soak. By the way Laura has found Burt’s home, he has all of his vetting to be done still, neutered next week and heartworm treatment a couple of weeks from now but in a few weeks he will be off to his new life, in the meantime he is enjoying the Ranch.

I’m so very proud of Mr. Burt today. It’s slow at the ranch and we decided to mainstream him in the pack to see how he does. No leash needed and just a few grumble growls to demand his space and he’s a big perfect monkey. Your mama would be proud of you today and so are we.

Burt is doing very good with other dogs, we will take it slow and give him lots of time. He avoids most dogs, and when he is a little reactive with them its due to being overwhelmed with them being wiggly and excited which he perceives as unbalanced and with little experience with other dogs he has to learn to just avoid and so far he is doing just great with that.
Hopefully getting him neutered and lots more experience and then we can select a home for him that we think will be a good fit for him. He is heartworm positive and will need treatment for that so he’s got a road ahead of him still.

slow and steady wins the race…

This big boy Burt, is very shy, very timid. He will hide in a den and when I go say hello to him he shakes and growls a little bit, have no fear I put a leash on him and out we went to sit in a chair and have a little conversation…Weez gonna be friends Burt…