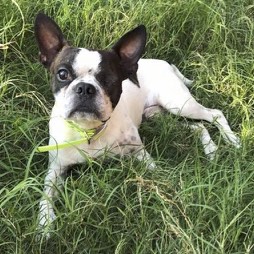 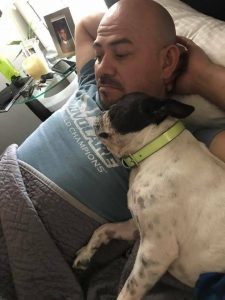 If you have a moment please grab a chair and let me tell you a little Sunday morning story.

I’ve told you before how much we love Aileen and Francisco who have fostered numerous dogs for us. There story started with Dog Ranch Rescue when they adopted Hustle a Bordeaux pup that we rescued from a mill auction in the “Dance group” they love him and we wished him a great life which we knew he would have.

After a few months they reached out and said they would like to be more involved in the rescue and in August of 2016 we rescued McBain from a mill in Missouri and we needed a foster for him. They happily jumped in and took in this big boy with no housebreaking experience and certainly no experience living in a home. He was a sick dog, sick with heart worms and was unable to take a lot of medications including Doxycycline that is standard medication to begin treating heart worms. It took us months and months to get him well and take care of all of his medical problems but we finally did. We searched and searched for a home for McBain but we had little to no interest in him, just as we found one back in January Aileen and Francisco told us they couldn’t let him go. Six months of nursing him and teaching him how to live with a family, walk on a leash and be a housebroken wonderful pet had done them in and they said they needed to keep him.

They then began to foster several other dogs including Mr.Peepers who they nursed for a very long time as well and saw him through to his forever home.

This past August we were so upset that McBain had been diagnosed with Lymphoma but they were going to do everything they could to keep him happy and comfortable.
About the same time we rescued Lenny and Aileen and Francisco offered to foster him and try and get him to settle down and eat which had been a problem for him since he came to us. We quickly learned that Lenny had terminal cancer and Aileen and Francisco were with him as he crossed the bridge which broke their hearts. Tragically McBain fell terribly ill just 3 days later and they found themselves saying goodbye to their big boy McBain too.

We were all devastated for them so much loss in just a few days. Just 4 days later we rescued Cappie and he was in very rough shape, we desperately needed a foster for him but all of our fosters were currently occupied. Laura hesitated to ask them due to the pain they were in but she did anyway telling them of course we would understand if they said they couldn’t.

They didn’t say no, instead they went to the hospital to visit with him, hold him and love him until he was finally released. They took his little broken tattered sick body home and began to nurse him through all of his medical issues. Emaciated and covered in bite wounds and one eye that had been ripped out. They took care of him day and night until he was finally healthy enough to have his eye socket cleaned out and closed. He recovered from that and was neutered and once he recovered from that he had his heart worm treatment. 30 days of rest was next and he has now finished with that.

Laura began working applications that had come in for him and found a family that she loved and approved. She called Aileen to tell her that we were ready for an adoption date and Aileen was tearful on the phone and told Laura she didn’t think she could do it. She didn’t think that her family could let him go. Knowing all the pain they had been through with their losses and healing they hearts with this silly little broken boy there was no way we could say no to them.

Laura called the adoptive family and explained to them what had transpired and they understood and know that we will need to find them another dog to adopt. Sometimes things don’t work out the way you expect them to, and instead things are written long before you come to the end of the story. It seems that the story of Cappie was written in advance on where he needed to be and that’s with the family that was there for him in his darkest hour to heal his broken body and at the same time he was healing their broken heart.

So with that we would like to wish Cappie a very happy life staying with the only home he as ever had where he felt safe and loved.

This sweet, neglected boy needed our immediate help. It’s believed he had been wandering the streets for weeks in his condition – beat up, fleas, ticks, and missing his left eye. He was picked up and put in a shelter. When we heard about him, Laura showed up at the shelter the minute they opened and worked out his release as quickly as she could. He was being eaten alive by fleas and ticks so I told her to bring him to me at the Ranch to relieve him from the suffering of these parasites.

He has wounds and contusions in both shoulders like he was being grabbed, wounds on his head, and he lost his eye.
He’s emaciated and only weighs in at 13 pounds and just as sweet and gentle as can be, never once did he complain.
After staying at the ER for fluids and assessment, the vets determined his eye is gone, he is heart worm positive, he has ear infections, and is just too anemic to for surgery. In looking at the x-rays it’s clear that he was hit by a car about two months ago and both hips are fractured and have started to heal and callous over. He’s emaciated and starving.

Once he is well enough to be released, Francisco and Aileen will foster him to help him recover from everything he has to go through, and he couldn’t be in better hands. We are so grateful that they are willing to open their hearts to another ailing foster, and we hope as he heals it will help heal their broken hearts as well. 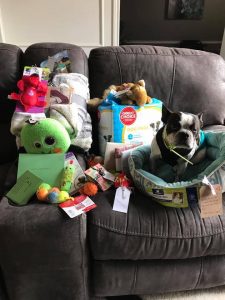 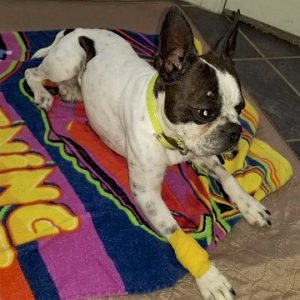 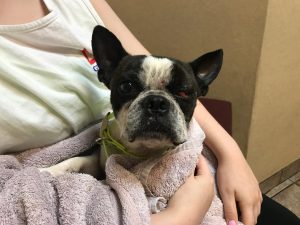 After five days in the hospital, Cappie went home with Francisco and Aileen. It’s unanimous: Cappie is an angel. He met the other dogs and was lovely with them. He just wants love, soft things, and a good toy. What a wonderful little man who’s life will never be the same.