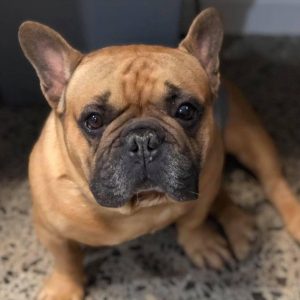 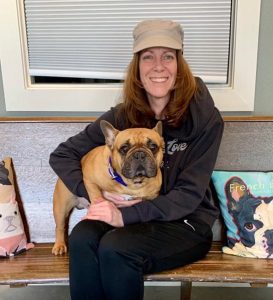 Mr Carrot’s new life began today when Debby Wrobel of New Lennox, IL adopted him. Debby is a previous adopter of DRR, so Carrot will be living the life playing with Pacer and Thunder. He will also have two very happy teenage boys to love and play with. We’re not sure what his new name will be but since Debby doesn’t like the veggie carrot, she’s certain it will change.
Enjoy your new life, sweet boy!

Carrot is a 7 year old, dark fawn with a black mask French Bulldog.  He is a handsome boy with a stocky build.

Let me tell you a little bit about this big boy Carrot and some of the problems he had at the auction. First and foremost he was absolutely terrified by what was happening to him as you can imagine. He was in his cage and apparently growled at some people who talked to him, when he was sold and it was time to get him out of his cage to load him in the bus he growled a little more so the man trying to get him out had to get a catch pole, you have to realize this is a fast paced environment and no time to try and sweet talk dog out, but with that being said the catch pole escalated the fear and he was more terrified than ever.

Laura got him loaded in a crate and did reach in to touch him, he was drooling and so afraid but he did not growl.
Once he arrived at the sanctuary Travis went and spoke to him and he did lift his lip a little bit. Now anyone who knows about handling dogs is there are some dogs that we refer to as “cage shy” which means when they are in a closed environment and very afraid they will behave this way and it is no way an indicator of who they are.

Travis opened his cage door and instead of reaching in we opted to open the door and tip it forward for him to slide out. He was fine once he was out, he is a macho dude but he minds his own business and now is the time for him to decompress and let us learn all we can about him.

I had to transport him this morning from the sanctuary along with all of the other studs boys so I opted for no crate, big Carrot was happy to ride shotgun in the passenger seat, no crate required, no fear needed…

He’s going to be okay, now that this awful experience is behind him.

We knew when we rescued this many adult studs that we would have issues, subsequently all 5 of them were moved to the Ranch to leave the girls alone.

Mr. Carrot right here who is so very handsome and loves hugs and people doesn’t care for these stud boys and cannot be with them.

He is hanging out with my pack in the office and will leave today with foster mom Amy. 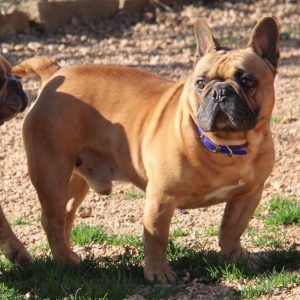 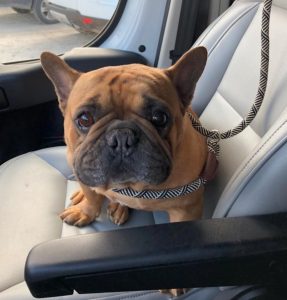