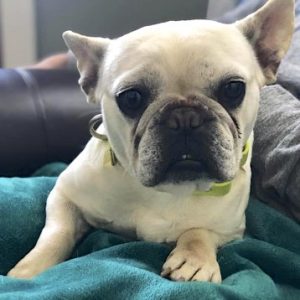 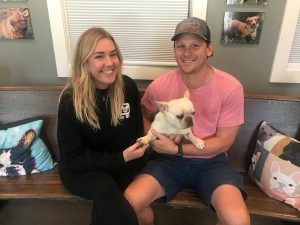 Sometimes there is no other explanation. Let me tell you what happened here before I announce this adoption. This is Jenna & David Perritt from New Orleans, they adopted our very sweet Chevelle from the car group just three months ago.

We were notified by email from them that she was stricken down from IVDD and it was so severe that her spine began to die and they couldn’t do anything but help her over the bridge.

When they sent that email at exactly the same time we received an email from Cavalier’s family that adopted her that they had to return her due to a family crisis. These two girls had been rescued together and played with each other as they recovered from life in the mill and the surgery they needed to be healthy enough for adoption.

We know it is very soon for a family to adopt again after they just said goodbye to their girl Chevelle aka Blanche but Laura put it put there to them just in case. They said they needed to think about if for a few days and after they did they said they would love to take Cavalier home and today was that day.

Sometimes these things just happen and you just need to accept the fate or move past it and they accepted it and this is now their new little girl. They are thinking of naming her Louella but we will have to wait and see. Right now shes on her way to the Big Easy to live her forever life.

She is a sweet girl, she loves to get the affection she’s lived without for so long. We will have her vetted done soon. She’s extremely happy to be free of the life of puppy mills.