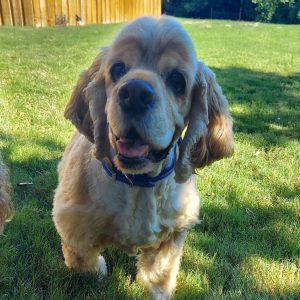 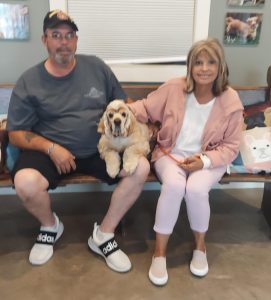 The Chad has officially left Fake Mama’s house. He will live a quiet life in Anna, Tx and be Ms. Peggy Saucedo’s new best friend. He quietly crawled under the bench and right between his new mama’s feet and sat there the entire visit. The Chad’s name will stay The Chad and he will never be left alone again. Happy Life my sweet old man, come visit Fake Mama sometime.

About Chad:
Our volunteer Liz Ross is the huge Cocker lover and asked if we would rescue this boy and we happily obliged. I’ll let Liz tell you the story.
“So I did a thing and Laura said yes…
Meet The Chad/Joel (I’ll get into that later)
I was tagged in a post about an old man cocker, scared in the Little Elm Shelter. I asked Laura if DRR tagged him that Fake Mama would be happy to foster him. Fake Mama set the wheels in motion and today was his freedom day! I would guess he is 10 to 12 years old, neutered, not chipped and apparently found in the Popeyes parking lot. Who could blame him, they have some good fried chicken.
I picked him up after lunch and off to Anna, Texas we went.
The Chad met the new ladies, Mama Renee, Lady Galloway and the intake crew. He didn’t hate it, until he did. Fake Mama had to stop grooming intake dogs for a seizure break from The Chad. He seems to be recovering from that craziness just fine this evening, but Dr. Reno wants to see him first thing in the morning.

Get ready for the Daily Dose of The Chad”!

UPDATE 10/2/2022
Do we not have any Cocker Spaniel lovers out there?
We’ve had little to no interest in this senior gentleman at foster mom Liz’s house.

Daily Dose of The Chad… The most perfect old man still waits for a mama! No new news about The Chad, he eats well with my pack, sleeps in a den all by himself, potties outside and barks at the nonsense of these youngins. He will be spending time at The Ranch with the Rotten Ross Dogs next weekend. I am sure he will complain about something and find his way into the office like the boss he is.

Daily Dose of The Chad…
The Chad is feeling much better with his new medication cocktail. He still drinks ALOT which then requires him to pee ALOT! Fake Daddy prefers the potty pants, just in case. Fake Mama has house rules and while we allowed the old man to ease into them, we had the “no dogs in the kitchen during human dinner” lesson last night. He was a bit confused and as you can see, he chooses to follow the other old man who thinks he is above the rules as well.
We attempted another pack walk today and The Chad made it ALL the way around the neighborhood. We stopped to see the ducks and turtles and then he opted for a roll in the grass this afternoon.
The Chad has his skin check next week and he will be ready to go to his new mama.

The Chad is still a laid back dude that really doesn’t give much attention to anything, but the vacuum.

Daily dose of The Chad… The Chad is attached to Fake Mama, I seem to be his source of anxiety. He is constantly looking for me and following me around, but if I am not in the house, he will sleep quietly, for hours. The Chad is a fantastic old man dog and would love to live his life in a soft dog bed next to his mama. He is potty trained, but doesn’t know how to ask to go outside. We have door bells, but he hasn’t used them, nor does he stand by the door. I bet he had a doggie door in his last house and could come and go as he needed.
The Chad is definitely not a fan of the vacuum, he gets very excited and let’s us all know.

The Chad is a great old man.

The Chad is a very sweet old man, that is settling in at Fake Mama’s house, he actually had a pretty good result with his veterinary exam and looks pretty healthy for a senior. Of course we have no idea how old he is but we are hoping to find him a good home regardless.. 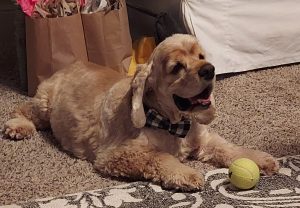