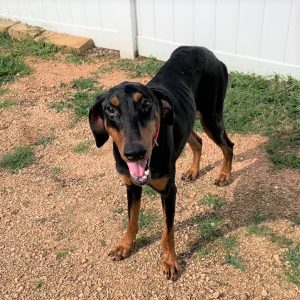 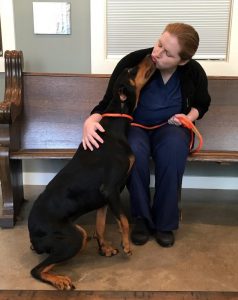 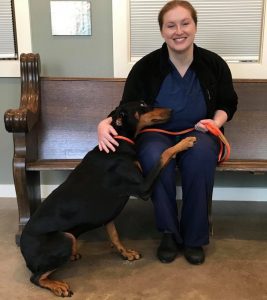 had completed all of her vetting and it was time to say goodbye to rescue and hello to her own family. She has been adopted by Leslie Moore of Dallas. She will have two other dobermans to play with once her crate rest is over. Her momma is a vet and Cheese will not want for anything! She happily strolled out with her new momma and will keep her name Cheese!

Because, really, who doesn’t like Cheese! Happy life sweet girl!

About Cheese:
It’s been a very busy day, this morning this red Doberman male came up in our newsfeed, I was too busy to look at it but he stuck in my head. Much later in the afternoon I asked Laura if she heard if he got a tag, she had not heard. I went to the Dallas Animal Services page and saw him there, listed in three different places as 5 years old, 7 years old and 12 years old. You never know what is true as the shelter staff is making guesses at various points of contact. I read the initial report on him, emaciated, covered in fleas, heart worm positive etc, etc, etc… all the usual things that dogs that need a rescue have. Then I looked further and there was an updated report and some x-rays and it was around 3:00 pm with him being schedule to be euthanized at 4:00 pm.
We also learned then that he was brought in with a female Doberman too, I quickly gathered the information about him, and x-rays and sent it to Dr. Reno, she looked at it as this is what it said:
UPDATED MEDICAL NOTES 06/02/2021 :-Upon exam, wt. 61.6, BCS2.5/9, reported coughing by Foster until he gags. After being brought to Clinic from Injured, P is coughing, gums slightly pale. Sedate for x-rays and evaluation. P has color mutant alopecia with flaking of dorsal head and ear pinnas, AD dorsal base is denuded in a circular pattern, cranial enamel defects of upper PM4.
X-rays reveal several consolidated masses in lungs, some are linear in nature. These masses could by lymph nodes or other questionable tissue. In addition, the mid trachea has a dorsal elevation, cardiac size slightly enlarged. Lung tissue has a very interstitial pattern.
This is not a typical HWP pattern. Due to age of P, disease process is likely cancer, fungal or COPD and prognosis is guarded. Start Lasix and retake films on 6/3/21 for review.
Dr. Reno read it all and her advice was to let him be euthanized, looks like he has a slim chance of surviving all that he is sick with. Sometimes I just can’t go with the advice, and I just didn’t want to let go of him, does he have cancer, does he have a bad heart, is he terminal? most likely, but that doesn’t mean he has to die in the shelter.
We then looked at the female he came in with, very sick with upper respiratory symptoms, could it be distemper, could it be mycoplasma, or is it just URI? we don’t know, she’s emaciated and very shy and covered in fleas and of course she’s heart worm positive too.
We decided to tag them both and send Mr. Ricky Barnes to pick them up to bring them to the sanctuary where everyone will gown up and glove up and place them in isolation.
Ricky has arrived in time to secure them and he is on his way with them both where they will be scrubbed clean and all of their external parasites removed and they will enjoy a quiet peaceful clean and warm isolation room to themselves.
You know lots of times when you rescue dogs you know that you can save them and turn their lives around, sometimes you rescue a dog like this male and you know that you probably can’t but you do it anyway, this sis one of those times.. who knows maybe he will surprise us, maybe he will live for a year, maybe we will do the best we can and some family will adopt him in spite of it all and he will have the best 6 months he’s ever had. Who are we to not try and see what happens, my gut tells me let’s do this…so you know what…. we did….
Let me welcome to Dog Ranch Rescue,
Mac and Cheese

Something we know at the ranch very well, dogs seek other dogs who have similar interests. You like to wrestle? You like to run and chase? You like to just lay around? Dogs seek friends who like the same things very much like humans do.

Dazzle and Cheese both came out of ISO at the same time and they are the best of friends and are a match made in heaven.

If you happen to be looking to adopt two dogs together these girls have no applications and they absolutely adore each other.

UPDATE 6/16/2021
We rescued Cheese together with Mac out of the shelter. They both came from the same home and into the shelter together. Poor Mac had to be helped over the bridge the neglect to his health with heartworms was just too much for his body to endure. That leaves us with just Cheese but she doesn’t want you to forget about her. She’s in isolation sick with upper respiratory infection but she will be well soon enough and we will see more of her. 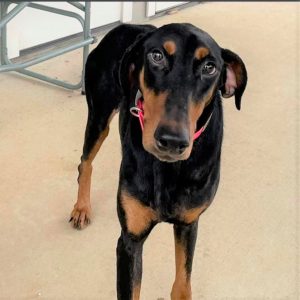