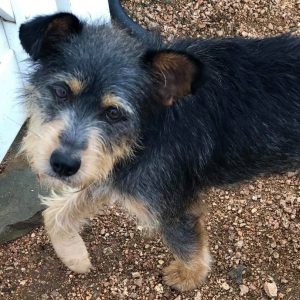 Today was Cinco’s Gotcha Day! Cinco is going to live with Melanie Bradfield, a repeat DRR adopter. Cinco has come a long way from an unwanted stray dragging his injured leg down in the valley. This little man loves his dog friends, his dog bed, and some good food! Melanie came well-prepared with several harnesses and a brand new collar with his new mama’s contact info on it. Cinco mastered the dog door on day one at our house, so he’ll fit right in at his new home, as his new collar already has a fitted dog door opener on it!
In our six years of fostering, my husband awarded Cinco the Best Foster Ever award before he left – this boy deserves the very best and yet again, Laura has found his perfect forever home.
About Cinco:
We have had our eye on this little guy for several days, he was in the shelter in the valley and clearly has a problem with this front leg. Who knows how long its been like this but I’m betting a long time and this leg will not be salvageable. Yesterday Raquel was able to go and pick him up and he will be transporting up to the sanctuary this weekend.

What a GREAT dog this little guy is!! He has had zero accidents in the house, sleeps all night in his bed, uses the dog door like a pro, has mastered the stairs with zero issues, runs 100 mph in the backyard, and had his first walk around our neighborhood pond (at which time my husband proclaimed he’s the best on-leash walker in our pack). We also had a few neighbors visit last night and they have small kiddos – Cinco was the star of the show and did fantastic with the kids! He was gentle and calm and loved the attention. Truly a gem, I tell ya. He gets his stitches out next week, and his incisions look great. He is finishing his Clavomox today, and he is just about finished with the gabopentin for his pain. He is the happiest little guy – he’s also the perfect sized pup in my opinion. Here’s some updates photos and a video to show how fast he is and how he loves to play! He’s pretty vocal, but his growls are just talking – he has shown zero aggression with any of our pack.

We sent Cinco home with foster mom Danielle to recover from his leg amputation, she sent us a little update:
Cinco checking in!
1. He is the happiest boy ever. He doesn’t give a second thought to the loss of his leg – he does great without it.
2. He’s smart. He’s learned the dog door (in and out) Day One!! He has not had a single accident in the house.
3. He sleeps quiet and content in his crate all night. Once he’s fully healed, I don’t think he’ll need to be crated at night. I don’t want him wondering and hurting himself, so for safety reasons for now, he snoozes at night in his crate.
4. He has discovered toys! He loves the soft ones that squeak and will carry them one by one out the dog door

5. He does very well with other dogs and so far has not shown interest in the cat. He desperately wants to play with Luna (Boston Terrier) – but we need him fully healed before he can play freely. He’s looking forward to it.
6. He’s super smart, gentle, and very food motivated. He takes his meds with no issue (seriously the easiest dog in that regard)
7. He was an excellent car passenger and just laid on his blanket in the back seat all the way home from the Sanctuary.

8. He is the CUTEST little scruff muppet – he deserves the perfect home! *He loves laying in the grass. We’ll get some outdoor pics tomorrow – today we rest and heal.

Let me give you an update on Cinco and this foot of his. It’s ugly to look at and his bones are exposed but remember that he doesn’t have any feeling in this foot. Dr. Reno isn’t positive if this is a birth defect or trauma, he only has three toes on that foot and we don’t know if he was born that way or if they have been worn away from dragging it. Regardless this leg will be removed and he won’t have to deal with it anymore. Is he not just the cutest thing?
We keep his foot bandaged so he doesn’t have to scrap it any longer and once he’s ready for surgery, it will be a thing of the past.