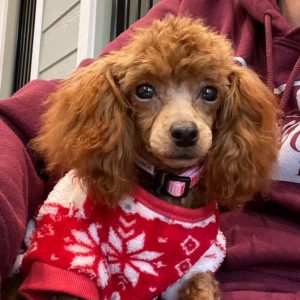 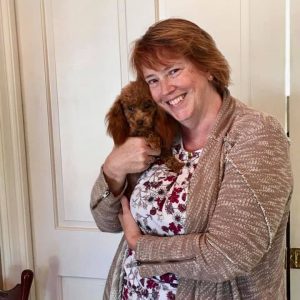 Our little Cinnamon Wells was adopted today by Lorie Converse from Grand Rapids, MI. Lorie is a nurse practitioner who travels for work and is often in our area. When she’s here she always makes time to volunteer at the sanctuary. Cinnamon will have Bonita (aka DRR Pretty), Winchester (aka DRR Eclipse) both adopted in 2017 along with a 14 yr old poodle named Emma Lou to keep her company. Lori’s parents also live with her and take care of the dogs when she travels. Cinnamon’s new name will be Pippi LaRoux. This little girl has been through so much and deserves to be loved on and spoiled for the rest of her life. Love ya, little one, we’ll miss you. Can’t wait to see you on the Happy Tails page.

About Cinnamon:
What a cute little red head she is. She’s just a baby with a birthdate of 5/9/20. We will be sending her to a foster home because she’s just a teeny tiny thing that needs to be in a home.
We will name her Cinnamon Wells. She is a Direct Support Professional for those with intellectual disabilities. She focuses her support on those labeled as behaviorally challenged. On 3/12 when California went into shelter in place she showed up and has done so since then. As the shelter in place goes on the anxiety for those we support intensifies but she like so many of her peers helps reduce anxiety and keep them safe. She is a shining example of professionalism in the midst of chaos.
Formerly #135 A

A few clarifications on my post about Cinnamon yesterday. Because I mentioned the fact that apparently 95% of Cavaliers have the same condition she has in varying degrees of severity people seemed to think I was mentioning that because Cinnamon was part Cavalier.
She is not, it was just information I thought would be interesting. Cinnamon weighs 4 pounds, she is a purebred Toy Poodle, no she isn’t a Teacup Poodle because Teacup Poodles are not a real thing just a name for a tiny dog that backyard breeders made up. There is no such thing as “teacup” in any breed of dog.
I forgot to mention that Dr Ducote has stated that Cinnamon is not to have any limitations on playing, wrestling, running etc, she is to live her life happily and playfully. The only restriction is she doesn’t want her to wear a collar, she doesn’t want her to walk on a leash attached to a collar.
She said other than that no restrictions for her. Now I understand lots of people have had dogs with the same condition but it’s critical for everyone to recognize every dog with this condition is not the same, there are hundreds of variables and it’s not a one size fits all diagnosis.
What I relayed about Cinnamon and her condition came straight from Dr Ducote. She’s had extensive work up and a highly skilled team of neurologist working on her diagnosis. I only repeat what I’m told and that’s all we can do when searching for her home. The health of any dog cannot be guaranteed for anyone it doesn’t matter if they are young or old, and what we always do is give adoptive families the information we have and let them decide.

This is going to be a long post so hang with me because its taken us a very long time to get to this point. We rescued little tiny 4 pound cinnamon way back in November from a puppy mill auction, not surprisingly we were inundated with applications for her and found her home and we waited for her to finish her vetting. After a few weeks Cinnamon had some pain coming from her neck and Dr. Reno put her on some pain meds hoping she had just strained herself a little. The problem was intermittent but persisted so we continue to look into it. X-rays were taken and Dr. Reno was concerned with her vertebra in her neck. Radiology suggested that we move on to neurology and neurology suggested that we need to get an MRI to see what is going on here.
It’s important to note that Millie says that Cinnamon doesn’t have any pain any longer and that will be very important information to understand as I continue to tell this story of her MRI results.
What we have learned is Cinnamon has a malformed skull and the malformation is at the base of her skull and causes fluid accumulation that would normally drain which causes hydrocephalus but in addition the fluid builds up in her spine.
Now this condition I was told today has varying grades of severity, from mild and even A-symptomatic to severe. A dog that has no symptoms would be a dog similar to Cinnamon, when all she ever showed was a little pain one time several months ago. A severe case would have neurological symptoms and pain and Cinnamon does not have that.
Dr. Ducote the neurologist I spoke with interestingly enough told me that 95% of all King Charles Cavalier Spaniels have this condition.
So what does this mean for Cinnamon? Dr. Ducote is very pleased that she isn’t having any symptoms and although we cannot be positive that will continue she said the older she gets and if she gets to the age of two without symptoms she will most likely not ever develop symptoms. Cinnamon is 8 months old now and is a very happy playful girl, if she does develop a little pain Dr. Ducote said they would treat her with Gabapentin and Omeprazole for inflammation and pain, she said we will not prescribe that if she remains symptom free. Both of these medications would have to be compounded because Cinnamon is tiny at 4 pounds.
The home we had selected for her has opted out with her diagnosis so we will now look for another home who will understand the diagnosis and the potential risks with her future and will be okay with that.

I will tell you she is all vetted now that this diagnosis is in so we will take applications for her again.

We have had little tiny 4 pound Cinnamon for a couple of months now and we have run into some serious problems with her health. Millie noticed her having a little pain in her neck sometimes she would cry out and we didn’t know why. We discovered a few days ago after some neck x-rays that she has two discs that are sub-luxating. C-1 and C-3 which are very high and this is a very serious issue that we are looking for answers on if we can fix it. The risk is that she sub-luxates too far and becomes paralyzed and worse yet has sudden death because the paralysis that high would control her breathing. We are now moving on to neurology and an MRI to determine if this might have a surgical option. Apparently this is an issue sometimes in tiny dogs.
She continues to stay with foster mom Millie, and we are now waiting on a neurology appointment to continue the process of figuring it all out. 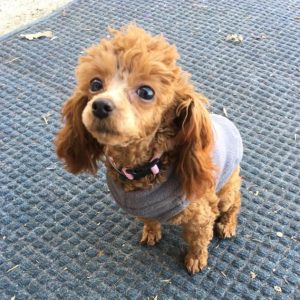