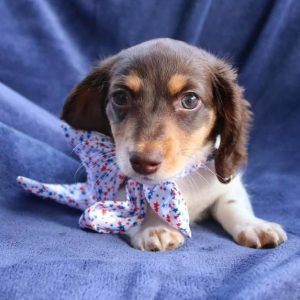 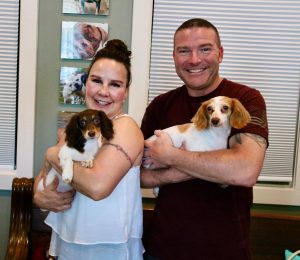 You might remember the names Jeff and Janna Caponera who adopted Upbeat/Bruno the chihuahua from mama Unity’s litter. I’m sure you all remember the beginning of this distemper crisis and it all started right here with this family. Not long after his adoption Upbeat/Bruno got sick and ultimately passed away from distemper. Soon after his mama Unity passed away and the nightmare kept going. The Caponera’s were devastated, but they felt strongly in their hearts that they were meant to provide a home to another rescue dog. We told them to choose any rescue they wanted and we would hold them for them.
They chose Clorets the dachshund puppy from mama Orbits litter. Then the unthinkable happens and Orbits litter one by one start showing signs of distemper. We lost all of the litter except Clorets and we were on pins and needles for weeks waiting to see if she too would show symptoms. The vets advised that if she could make it 2-3 weeks from the time the last puppy passed away and not show any symptoms then she would most likely be ok. Week by week we held our breath watching and waiting to see what Clorets would do. Week after week she remained healthy. Six weeks have passed since the last puppy succumbed to distemper. Clorets has now received 3 rounds of puppy vaccines. She and mama Orbit were tested for distemper and both are negative. Hallelujah!
Today Jeff and Janna drove to the Sanctuary to adopt Clorets and surprise, they are adopting mama Orbit too. They felt that both of these girls are miracles and after everything they have been through they wanted them to live the rest of their lives together. They patiently waited for all of the vetting to be done. Once the distemper tests were negative all that was left was for Orbit to be spayed. We have finally made it past this terrible distemper ordeal. Nothing but happiness going forward. Jeff lives in Wisconsin and these girls will both get to go to work with him at the police station. Jeff’s staff loved Upbeat/Bruno and were heartbroken right along with Jeff and Janna when they lost him. To say Orbit and Clorets are going to have a huge extended family is an understatement. The staff is ready and waiting to start spoiling these adorable dachshunds. The family has come up with some super cute names for these two. Clorets will now be known as Schnitzel and Orbit will be named Snicker Doodle or Snickers for short. They will get to travel to Texas often and that means enjoying time with the other dogs in their family, a black pug named Benny and a pit bull named Bambi. What a journey this has been. We are so beyond thrilled that Jeff and Janna were open to sharing their hearts and home with these precious dachshunds.. Cue celebration music because after months of uncertainty this story has a happy ending. Orbit and Clorets are starting a new journey today. We know we will see updates on the Happy Tails page of them living their best life very soon. Have a fantastic life Orbit, Clorets, and the Caponera family.
About Clorets:

Wearing an orange collar a female weighing 7.9 ounces and her name is Clorets. 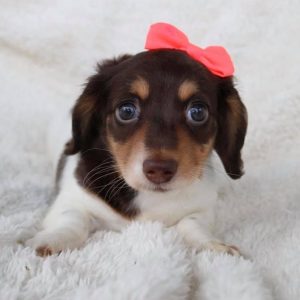 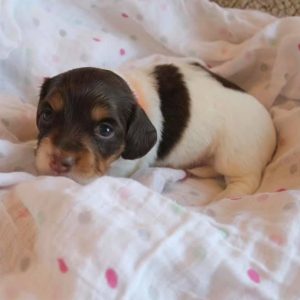 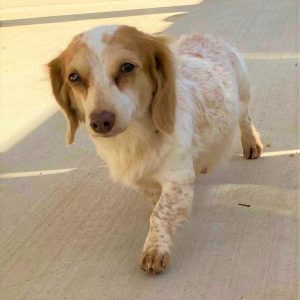