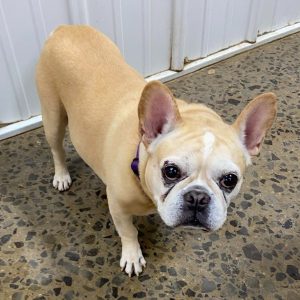 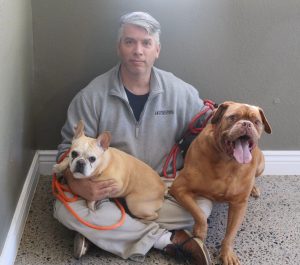 We were pretty worried when Disco and Billie Holiday lost their home with their mom being ill. Both seniors and very hard to place. they are bonded and follow each other around and breaking them up would not be the right thing to do…
Steve Townley aka the Fat Man enters the conversation….
He reached out to see if he could help with adopting Disco aka Coco and we said it would be best if they stayed together. He needed to have some discussions because he’s never had a big dog before and wanted to know more about Billie who happens to be a very small Bordeaux, who needs to lose 30 pounds.
He said I will be their papa and take them both home, Steve makes his own raw dog food and we discussed Billie’s diet, how much food she needs and he will set to the task of getting the weight off of her.
So this morning off he rode towards home in Mt. Pleasant, Texas and we couldn’t be more grateful. Steve also added that if their mama was ever able to recover enough to take care of her dogs again he would gladly bring them back to her, he said that’s what he would hope for if he were in that position and we think that shows the reality of his very big heart.
As I’m writing this post this afternoon after Steve had taken them both home we learned that Billie and Discos mama passed away. She loved these dogs so very much and I have to think she was looking in on this adoption with a very relieved happy smile.
Do we really think that is a coincidence? I don’t think so.
Happy life to all of you all and thank you for stepping up to help these two girls and to give peace to their mamas heart. Rest In Peace Kathy your babies are safe and loved.
About Disco (Coco):
This is a very sad story and one I know none of us want to have happen to us.
The Frenchie born on 11/17/11. she came to us very, very shut down and Kathy adopted her back in May of 2016. Aaron Stewart was called into help and she made a complete turnaround with coming out of her shell.
In April of 2017 Kathy once again adopted from DRR but this time it was a Bordeaux we called Billie Holiday. She was rescued from a cruelty case and was removed from her owner, a very sweet mild girl.
Last week we got word from Kathy’s family that she came down with Covid and has done very poorly and moved to a rehab facility with no ability to care for her dogs. Sadly they were both returned to us at the Ranch, it’s just a terrible terrible thing and we feel horrible for the family and for the dogs. Disco is now known as Coco and she is now 11 years old with no mama. Billie’s age is unknown but she is most likely 7 years old or so.
Both of them are pretty shell shocked not knowing where their mama is and now they find themselves far from the home that they loved for years and years and we have to now find them a new home. It’s not going to be an easy feat and we aren’t going to try and keep them together this will be hard enough as it is to find an adopter for an 11 year old Frenchie so when you try and add a Bordeaux to that adoptive family you make things pretty impossible. As I said earlier we can all imagine ourselves in this situation and we would all not have any relief until we knew our dogs had been rehired to a place that would love them for the rest of their days.
Coco and Billie are now part of Dog Ranch Rescue again. 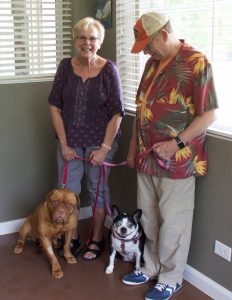