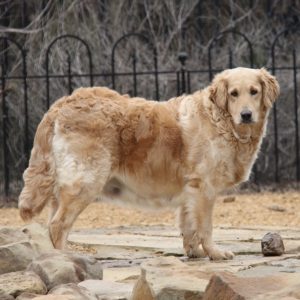 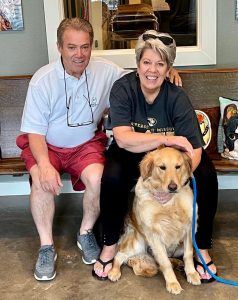 This is why we do what we do, this is why the power of the village is immeasurable. You never know where a dogs family is even if they aren’t on Facebook!
Whew! It has been quite the journey.
Cove is finally going home. She is so deserving of a soft place to land and that’s exactly what Deborah and Clel will give her.
Cove is going to Kansas City, MO. Deborah and Clel aren’t on Facebook (sadly no Happy Tails updates) but, how did they hear about sweet, beautiful Cove, you ask? Word of mouth! Their son was out walking one day and came across some folks with a doodle and struck up a conversation and learned about DRR. Deborah went to their website, read up on Cove and reached out to Laura. They have had a few golden retrievers in the past and have experience with dogs who have suffered trauma and are shut down.
Today was the day. Foster mom Ana and foster dad Andy gave Cove a good scrub last night, a thorough brushing this morning, loaded her up and Ana headed to Anna. Cove is still pretty shut down so she was nervous going in. Ana and her had a few minutes of quiet to decompress a little before her new mom and dad arrived. Deborah sat down and Cove came over and laid at her feet! Ana was blown away and so very proud of this brave girl. She got lots of pets, and with a little coaxing, off she went out to her chariot home where she hopped right in and settled in. Deborah and Clel rented a transit van for the journey and the back was all for her and filled with blankets along with a couple of chew toys, a bowl for water and some treats. She is already being spoiled and she’s not even home yet.
Cove will be the only dog in the home but she’ll have 2 kitty siblings. Deborah and Clel also have some grand babies who will come to visit so there will be no shortage of love for this sweet and oh so deserving girl. They want to change her name and were thinking of maybe Clover, which is pretty fitting considering that she’s so lucky to have such a bright future, but the name is not official yet.
Happy Tails, Cove! We just knew your perfect family would come, we just needed to have a little patience.

About Cove:
This girl arrived late yesterday completely freaked out and unable or willing to move on a leash. She and her sister, Waterfall, were both born on 5/5/2017. Her ears are so badly infected that you cannot see the canal. She is at least 15 pounds overweight and clearly she had no exercise with the life she lived. 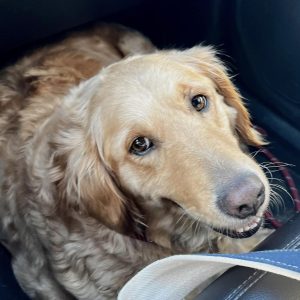 All of the dogs from the water group have long gone to their forever homes except Cove. Some dogs are just much harder to work with and this sweet girl was so very, very shut down. Ana continues to work with her and she sent us this update:
I have so many videos of Cove walking around just AFTER doing something cute and/or playful. I swear she had a sixth sense for when I get my camera out. You’ll have to settle for these cute pics.

She’s getting much more comfortable being near me and often chooses to do so. I’m getting lots of pets in during the day. I feel like we’ve had a bit of a breakthrough in the past week and she seems to have hopped over some threshold that was holding her back. She’s still quirky and afraid of quick movements and loud noises. She doesn’t like it when you walk towards her and will burnout on your toes to go past you if you approach her. She panics if you “sneak” up on here (like if she’s sleeping and doesn’t know you’re walking by but wakes up as you’re passing). She’s very easy to walk on a leash, the hard part is getting it on her. Our son has moved in with us and she barks at him every time she sees him. I’m not sure why, but she does. She’s still got a ways to go but I’m so proud of how far she’s come.

Ana is still fostering Cove who is a very shy frightened Golden Retriever that came from a mill. She sends us her latest update:
This is as close as Cove usually gets to us when we’re hanging out in the backyard. This morning l, I was outside with the dogs, and she came close to me so I put my hand out and she touched her nose to it. Which is huge for her. She’s also choosing to hang out in the living room or dining room with us, which she doesn’t normally do so I have to leash her and bring her in.

Ana sending us an update on Cove and doing what Aaron Stewart said to not allow. No hiding, you don’t advance when you hide.

“Cove has been hiding out since she got here and we’re done with that. She’s leashed up and hanging in the living room with us tonight. We’ll continue to do this going forward because she is so incredibly shut down. I give quick pets here and there while speaking affirming words in a sweet tone in hopes that she will learn that humans can provide love and comfort, not pain and cruelty. Stay tuned!”

This is Cove, a mill mama that arrived with her sister Waterfall a few weeks ago, both of them so terrified of people that you could barely touch them. A leash was so foreign to them that Cove here would drop to the ground flip on the ground like an alligator, grab the leash and chew it in half in about 30 seconds. When we transported her to and from the vet it was in a crate and this girl is heavy, both of these sisters came to us very overweight. It was the only safe way to move her about until we could slowly work with her on moving on a leash.

Ana has taken her in as a foster and has started taking her out on pack walks with her dogs. This girl is a tough one, but Ana is making great strides with her.

We will be separating Cove and Waterfall to two different fosters. They’ve come a long way, but they need to be away from each other to grow any further.

Progress in baby steps, Cove would never take treats from our hands when she first arrived. Today we had a little breakthrough.

Cove has made very good strides in physically moving about around the yard and building with other dogs. She has a long way to go with humans and feel it would be best to separate her from her sister Waterfall, but we really don’t have a place for them to go with the sanctuary closed and fosters very difficult to find.