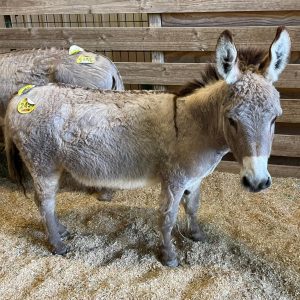 Adoption Pending
Age: Adult
Breed: Mixed Breed
Sex: Male
Weight:
Kids: Not Tested
Cats: Not Tested
Dogs:
Fenced Yard:
Location: Anna, Texas
Special Needs:
About Curly:
We always think that Millie’s going to take a break in between her donkey fosters heading off for their new homes. She never does

We give her free reign to rescue what donkeys she wants when she wants we just pay the bills.
She was working on these 3 male mini donkeys even before the adoption of Birdie and Bernice was complete.
Off went mama and baby and incoming these 3 boys happened within hours of each other

Millie:
Well did it again.. got a call the other afternoon from a woman out at the Bowie lot about a group of Jack donkeys that were being loaded on a truck for shipment to Mexico. What’s happening now at a lot of the kill pen lots is they are not even posting the Jack’s … no one wants them.. people can’t be bothered with gelding them so why waste time taking photos /videos and trying to move them. Just ship them out. The girl that called me just happened to be there and saw them.. she thought they all got saved when she came across these in another area. She called me. I called Laura and needless to say we had to help.
Welcome The Three Stooges to Dog Ranch Rescue:
Larry, Curly and Moe
(Just an interesting fact for those that don’t know … Curly of The Three Stooges would make it a point to save at least one dog in every city they went to and is credited for saving over 5,000 dogs!)
They are all a little older and I’ll get an estimate of their age at the next vet visit.
Larry has pneumonia and is being treated, Curly has a wound under his neck that has been cleaned and medicated.
Curly is a very friendly chunk-a-monk that will come up and ask for treats. Larry approaches more slowly but loves treats too. Moe, not so much but he’ll come around. I haven’t measured them yet but both Moe and Curly look to be minis (under 36 inches) … Larry is just a little taller.