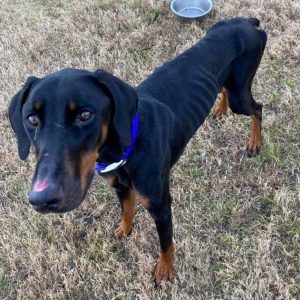 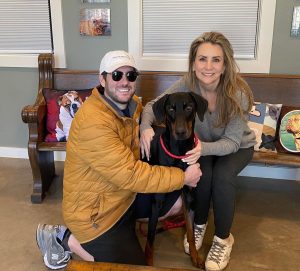 We will never know how Denali the emaciated Doberman ended up in the shelter but we are so happy that life is behind him. His future is looking even brighter today as he headed off to his new life in Fort Worth with Laura Marr and Bob Clark.
Laura and Bob previously adopted Calvin Hunter(Rooster)the Doberman and Ham (Chubby) the Bordeaux. Rooster passed at the beginning of December and they opened their hearts to Chubby but have felt that he needs a playmate. When Laura saw Denali’s picture she had this tug at her heart that told her she needed another Doberman in their life and when they were chosen to be his family, they could hardly wait for him to be ready to bring him home!
Laura brought along her son today and they were so excited to meet him and could not believe how good he looks. His new name will be Turkey and we should see him and his brother Chubby (Ham) on Happy tails soon!
About Denali:
This guy is in very rough shape, he was a stray on the streets of Dallas and is literally starving to death. He is a medical rescue and Dallas let us take him into our possession to get him to a doctor, but we also know that the stray hold has to be honored and respected, but instead of his stray hold needing to take place at the shelter it will take place with us in isolation. He is currently at the vet being examined. I sent a stool sample from him this morning that was full of trash and plastic, clearly he’s been starving for a very long time.

Denali is looking so much better. All he needed was food. It’s a damn shame that dogs get starved like this, really hard to wrap your head around.

This boy is Denali and he is as you can see completely emaciated. He vomited last night and we could see that he has been eating a great deal of trash, plastic bags, and what looks like coffee creamers that were in his belly. We are feeding him 4 small meals a day and will take it very slow with him. He is also in isolation with only being in the shelter for a couple of days. Dogs that we mainstreamed are dogs who had been in the shelter for months and have already moved past the period of time they get potentially sick with illness. He is pretty happy to not be in the shelter anymore.