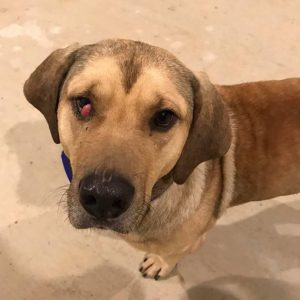 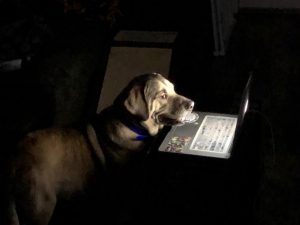 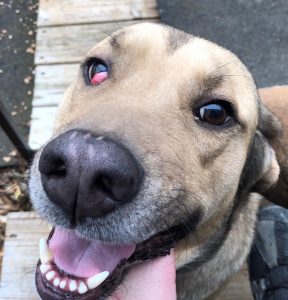 Look at the pictures at the beginning of this video of this dog in the shelter. This dog basically had no chance of getting out of PVAC alive. He’s a weird looking mixed breed dog – and nobody wants to adopt weird looking mixed breed dogs. He’s got a messed up eye, one of his back legs is dislocated and basically unusable, and he doesn’t look “cute” – he looks like he’s given up and lost hope.

Couldn’t scroll past him though, and so now here he is.

He’s still not 100% – his eye is still messed up and his back leg is dislocated and atrophied, and his bloodwork still indicates he’s not healthy enough to have these things surgically corrected, despite having three rounds of medications already.

Despite all that – this dog is totally unrecognizable now from those first shelter pics. I’ve gotten to know him really well, and he’s just this amazing, wonderful, silly, dopey, chill, loving, and loyal dog.

All of the dogs in my house are confined to their cubbies every single time I leave the house – even for a minute. Each of them has a unique set of negative behaviors they indulge in if I leave them loose unattended – details omitted 😬

But not DD. He’s loose in my house 24/7 whether I’m home or not – and I’ve never had a problem. He doesn’t bother the cats, he doesn’t tear anything up, or mark anywhere – nothing. He’s always just chilling on the couch looking out the window waiting for me to come home.

And nobody wants him.

Yes, he did have one person who was interested, but after a trial in their home it just wasn’t the right fit, no fault on either side. Besides that, he’s had zero inquiries or applications, despite being posted all over the page with his endearing screen watching and food obsessing behaviors.

Sucks to be you guys I guess, cause ya’ll missing out on a great dog.

I won’t be though.

I’m not gonna have “No Diggity”

I’m gonna have “Some Diggity”

This one’s staying with me.

We agreed on taking this boy that Wes said was haunting him knowing that Wes will need to foster him and Raquel drove all night last night to bring him up to the Ranch.

He’s a shorty, he looks like he has given up on life, he has a cherry eye that needs to be repaired but he is a lucky dog, he just won the lottery and as of this morning has arrived to the Ranch.

Once we got Diggity Dog up on his feet it was very clear that he has a significant problem with his back leg. My guess is its a torn ACL but a complete exam for sure will happen very soon. Pain meds have been give and we will see what needs to be done..

X-rays confirm that Diggity Dog does have his hip that is out of the socket, perhaps hit by a car….who knows, these dogs living on the streets in the valley are subjected to so many things it’s just awful.

Ultimately it will require surgery and he is scheduled for a consultation with our surgeon on Monday morning.

Yesterday Diggity Dog was taken to Dallas Veterinary Surgical Center for an assessment of his hip. We learned that he had bilateral hip dysplasia and his right hip is out of socket. This is incredibly painful for him. We also learned that it appears he is sick with ehrlichia and his platelet count is very low, with that information he cannot have surgery until we get that taken care of. You cannot operate on a dog with platelets like this because his blood will not clot properly.

He is going to need an FHO which is the procedure where his hip socket will be cut off so the bone is not grinding anymore. We can only hope his left hip doesn’t become painful because he has dysplasia in that hip too. We will be treating him with doxycycline to try and get his platelets back up and once we have accomplished that he will go in for surgery on his hip, the ophthalmologist will come into the same surgery and repair his cherry eye and he will be neutered all at the same time.

He’s got a long road ahead of him, he is on pain medication for his hip but it will have to wait for now.

Diggity Dog is now chilling at Wes’s place, he is so happy to be in a home and is such a good boy. He is so laid back and just lovely with dogs and cats. Dr. Reno came to the sanctuary today to do all of the rechecks and boosters on the rescues and Wes took Diggity over for his. They all love him and he loves them and they all gave him lots of hugs and kisses.

He’s a fantastic dog. Super happy and bouncy and frolics all the time. I don’t know if his leg hurts or if he doesn’t care, he doesn’t use it much if at all, and gets around perfectly fine in spite of it. He wants everyone to be his friend, including the cats which have been really tolerant of his garishness because they know he means no harm. He’s loose just about all the time when I’m home, but will go in and out of his crate freely to lay down. He really likes food, and if you make *anything* to eat he’s in the kitchen smelling for it and doing little hops to try and see it. 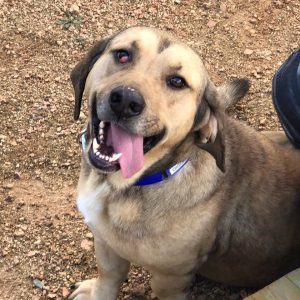 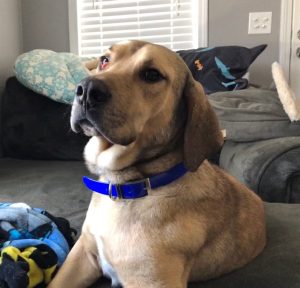 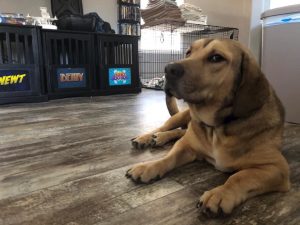