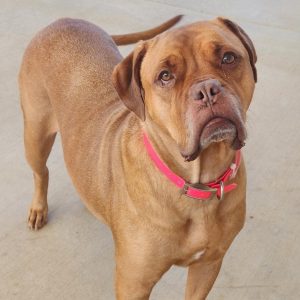 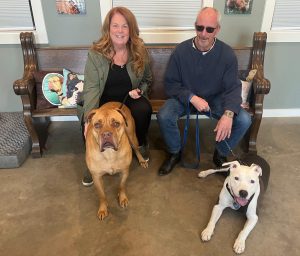 No more counting the days of miss Dottie without a home! 95 days later, Dottie has found herself a loving family with John and Deborah Werner of Weatherford, TX. They recently lost their non DRR Bordeaux Violet and since then, their pit Jack hasn’t been the same without his companion. Once they saw Dottie and her story, they knew she was what they needed to bring back some joy into their lives as well as Jack. Jack couldn’t have been more thrilled to meet his new fur sister. He will show her his collection of toys and how to play chase around the back yard. John and Deborah have decided to keep her name Dottie as it fits her so well. They’ve been introduced to Happy Tails as well and will give plenty of updates onto how she’s doing. Thank you once again for adopting this special girl and have a safe trip back

About Dottie:
When we rescued Cleo and Teetsi we knew that they belonged to a veteran who lost his home and his dogs were seized. We could only take two of them. We already had 10 DDB’s in the rescue and had no space. They had 3 siblings that were in the shelter in Denton since August 1st. We were constantly tagged over and over again to take all 5 of them, but we just couldn’t. The shelter answered comments on their page of people telling them to contact us about them as the shelter continually told them that we had already taken 2 of them. The three siblings sat in the shelter week after week. This past weekend one of them was adopted, but we were told that Diamond was taken off of the shelter’s page because she wasn’t doing well, refused to eat and was shut down. The other sibling still there was Dottie. We are told the two of them do not like each other. We don’t know if that’s true or if they just have broken pack behavior and its never been addressed.
Being in the shelter is exhausting for dogs that used to live in a home. They don’t understand, they miss their family, and it hurts their hearts and it hurt ours too. We couldn’t overwhelm the ISO room with potentially two Bordeaux’s that don’t like each other complicating where do they go if we pulled them out. Kim Foster has volunteered for the rescue a long time. She said if you pull them both out I will foster Diamond at my house to get her through the isolation period to see if they become ill with upper respiratory sickness. That was a huge help, and with that we said tag them both, let’s get them out of there. So Kim picked up Diamond yesterday and today Dottie was picked up and taken to the sanctuary. If they don’t like each other, we will always keep one of them at the sanctuary and one of them at the ranch, but we are hoping with lots of space and some proper behavior corrections they will be just fine. Kim said Diamond met her dogs at her house and was just fine with them.
We know we are overloaded with Bordeaux’s I know I sound like a broken record saying the same thing over and over again but I encourage those of you looking for a large dog to consider a Bordeaux in your life, if you ask any of us once you own one you will always own one. We can all feel a little bit better now knowing all 5 of them made it out of the shelter safely and now the very hard job of finding homes for them begins, sadly Dottie is HW positive, Diamond clearly needs eye surgery, but we will get all of that taken care of and begin to search for a good fit for them with a new forever home.
I know we look crazy with rescuing so many Bordeaux’s but we’ve gotta do what we gotta do and today this is what we did.

Welcome to dog Ranch Rescue Diamond and Dottie. We are sad you had to wait a month in the shelter, but we are happy that’s behind you now.

Is she a fit for you?

Dottie is extremely shy and cautious if she doesn’t know you. She is just now starting to come around to certain volunteerss who she has met a few times. They had trouble with her at the vet bc of how shy she was. She flinches very hard and doesn’t want you to touch her in those scenarios. We stopped her ear meds because it would set her back with trusting me every time I had to do something to her.

Once she’s comfortable she is bouncy, happy, will get in the car and go wherever with you. When I picked her up from the ranch last week she was full on goofy happy bear when she saw me. She just follows you everywhere.

Dottie who is Cleo and Teetsi’s sibling is currently in ISO but she is feeling much less stressed being out of the shelter and in a quiet peaceful environment. In a week or so she can come out and say hello to her sister and brother.