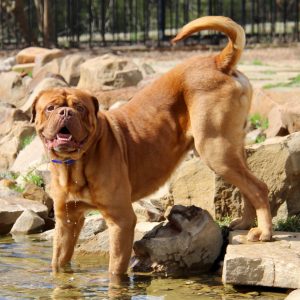 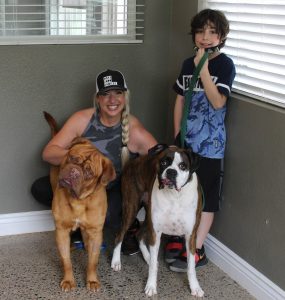 What we always say and it’s important to remember is we are only a bridge for the rescues, the bridge between their old life and their new one. Doyle was so happy to go, he had a taste of home life with his trial home that didn’t work out so this time he knew that this was another possibility at life long success.
Off he goes with the Ramsey family from Oak Point, Texas, he has a brother that is the Boxer named Magnus, and a little boy of his own that he will love to snuggle with. The Ramsey family have had Bordeaux’s in the past so they aren’t new to the breed, Magnus loves to wrestle and so does Doyle so his life should be complete. He just never looked back, out the door he went, zeroed in on the car and leapt straight for it. As it should be, the bridge is complete and he has safely crossed over to his forever life.
Doyle’s new name?
Well, he shall always be just Doyle, which is perfect for him…
About Doyle:
All we know is he was a stray in Coppell and we were contacted. Travis went down to meet him today and said he is young and a big goofball. They neutered him at the shelter and he has an ear infection but that’s all we know so far. Travis has loaded him up in the car and is driving him back to the ranch now.

UPDATE 4/7/2021
We just call him Ding Dong Doyle because a goofy ding dong describes who he is.
I just don’t know why we don’t have a ton of applications for him but we don’t. The ones we have arent a good fit. We don’t want to place him in a home with cats or small fluffies. Doyle is playful and likes to wrestle with other dogs and would love to have a sister or a brother.

He has been here for almost 2 months and he is a little weary here at the ranch so we are hoping to find that perfect home soon.

UPDATE 3/31/2021
I don’t know why he’s still here but he is. Doyle has had some applications but not the best fit.
He does very well at the ranch with other dogs with a few quirks. He has a wild side, where he wants to grab things out of your hands like a leash or a towel, he thinks he’s funny and he wants to get in your lap because he thinks he’s small…(He’s not) He likes to play with other dogs but like most Bordeaux’s they don’t have a lot of stamina to keep that up. We would prefer to not place him in a home with small fluffies, cats or dogs. He just sometimes has interest that we would like to avoid, and a home without them would be preferred. Doyle has done very well with housebreaking, he never soils his den and he behaves in his den for us. He did go stay at Dr. Reno’s and was kept in a wire crate that I’m told he busted out of so that needs to be kept in mind.

All in all he is a big goofball and he will be a great dog for someone we just need to find the right application for him. All of his vetting is finished, he’s been neutered, he has had his teeth cleaned and slowly but surely he is getting to a healthy weight but we would really like to see him find his home now.

UPDATE 3/23/2021
Doyle is approximately 3 years old. It’s always a guess when they come out a shelter. He was in a shelter in Carrollton and nobody came looking for him, he was neutered and had a bad ear infection. Doyle is not very good about working on his ears so Dr. Reno packed them with medication when he had his dental so all is well. Doyle has done very very good at the Ranch with other dogs, he has had a few issues with Tony but only because Tony hadn’t yet been entered and this is common for a male to challenge dominance and means really nothing. Doyle does like to play some with other dogs, he needs work on his manners with jumping on people, he would love to just sit in your lap and doesn’t recognize how large he is. Doyle is a good size Bordeaux around 100 pounds now and needs to put on about 15 pounds of muscle and fat. He has shown a little bit of interest in small dogs behaving wiggly and because we take no chances we will place Doyle in a home with bigger dogs. Doyle is ready for adoption now.
UPDATE 3/13/2021

We are very pleased with how well Doyle is doing, to bring in an intact male with a group of 75 to 80 dogs and him not have one issue is pretty darn good indicator of who he is. Doyle just wants a hug and to sit in your lap and if you give him an inch he will make that attempt very quickly.

Big boy Doyle is settling in. He is a high energy Bordeaux, thankfully he is heartworm negative, but he does need eye surgery as you can see by his eyes tearing. He has entropian and has an appt schedule next week to be examined by the eye specialists to repair them. If you are looking for a strong muscular active Bordeaux, this guy might be what you’re looking for. He has quite the dislike for his ears being medicated but we are working on it. He needs to gain weight and fill out, but he’s doing good with the other dogs.

I’m pretty proud of big Doyle. We did assessments with him on leash for awhile before so I could determine who he was and if he could be integrated with the pack. This can be a challenge with an intact male with no social skills but Doyle impressed me as a quick learner. He shows all the signs of a dog that has just been abandoned to live in the elements with little to no human interaction. This is clear from not only the physical damage but I’ve seen the emotional signs many times. His ears are scarred both sides from constantly bites and these will always be there. Emotionally, he’s a very excited guy but is eager to please and learn from humans. He’s a proud guy with his tail highboy isn’t presenting himself as rude to the packin’ this way. In fact, the ladies are drawn to him and he just doesn’t know what to do with himself. 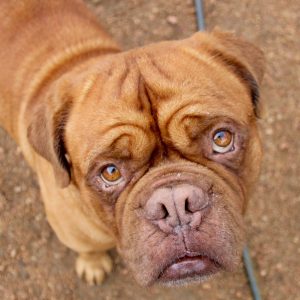