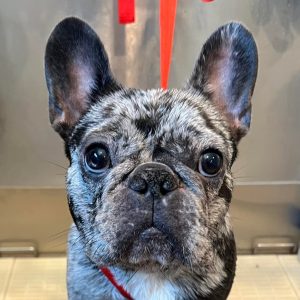 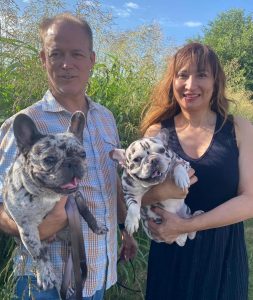 His story is an interesting one, he was picked up as a stray with an English Bulldog, both held at the shelter on stray hole, neither claimed. The English bulldog went to Lone star bulldog club Rescue. The Frenchie came to us, he is such an easily identifiable dog and we thought for sure he must have an owner so we shared him on our page a couple of times. We received tons of emails from people the vast majority just wanted to adopt home.
We did receive quite a few emails of people sending pics of their Merle Frenchie that they had lost or that was stolen, very quickly one y one we could rule them out as their dog. He was intact when he came in to us, we neutered him and waited, we gave it a couple of weeks and even after we had located what would be his new family we waited some more. After we exhausted all attempts for someone claim him, the time had come to send him on to his new family. We called him Dragonfly and Trish facilitated his adoption for us.
Randy & Vickylin Massey from Allen, TX. took him home, this is Dragonfly’s new brother, Fabio. A very interesting colored Frenchie which none of us have ever seen before, reportedly he comes from a litter of all brindles and he came out like a tiger. Most unusual Frenchie I’ve ever seen and was born in a litter of all Brindles.
Dragonfly’s new name will be Croissant.
We wish all of them a happy life together.
About Dragonfly: