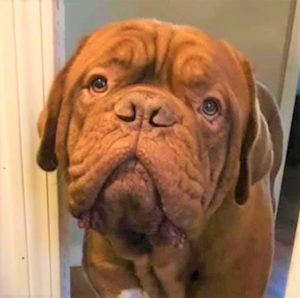 Available for Adoption Soon
Age: Adult
Breed: Dogue de Bordeaux
Sex: Male
Weight: 135 pounds
Kids: Not Tested
Cats: Not Tested
Dogs: Needs an only dog home
Fenced Yard:
Location: Anna, Texas
Special Needs:
About Duke:
I’m going to close the night with this story, it’s a little bit long but I think you will enjoy it. A few nights ago around 10:00 Pm I was scrolling on Facebook and saw myself and Laura tagged in this post about this bear. Lord have mercy he has a face that would stop a clock.
So I read the post and it had all kinds of drama in in it that I won’t go into here because it turned out to be untrue. The bottom line is this Bordeaux was shared all over the internet as needing to be rehomed stating that he was dog aggressive and had to be an only dog.
So here I sat sick in my covid bed looking at this face knowing the problems here, first and foremost he’s in Massachusetts second the post said he would be euthanized in 9 days if placement wasn’t found (turned out to be a lie by some family member looking for drama) but we didn’t know that at the time.
We just did this hunt for unicorn home for Zeke, and we know full well how hard it is to find that so do we want to jump into that again? the captains would have to take care of him at the sanctuary like they did for Zeke and he would be alone the rest of the time while we hunted for a unicorn. Massachusetts is very far but I couldn’t get that face out of my sick covid brain.
I grabbed up his info and sent a text in our DRR thread and said look at this boy, I knew that Laura was asleep and wouldn’t see it until morning and I also knew she would say this is a very big project you are wanting to tackle here ma’am, and she was right, but sometimes that’s just how I roll. Jessica sent this emoji

Wes said oh my he is very handsome. Travis said I’ll go get him in Massachusetts right now.
So we reached out to DDBR who was trying to secure him but big surprise they didn’t have a foster for a dog that was aggressive with other dogs, because like I’ve said a million times trying to take on a dog like this is a challenge. We knew that we could isolate him for a few weeks at the sanctuary while its basically closed which would give us 3 weeks to find a unicorn home for him so Laura commented on the thread that we will try and take this on. The owner called Laura the next afternoon, this is the story bout this dog named Duke.
He lost his first home when the family had a baby, they were scared to have him with their female DDB because she had bad hips and Duke played rough and she couldn’t handle it. In addition Duke killed two bunnies and one squirrel in their backyard.
He was rehomed two years ago and went to live with this family that had no other pets and he lived with two little girls and they loved him very much, no issues with the family at all, he was a great pet for them. They are blending two families together and my guess is they have pets and Duke was then on the outs and in search of another home, and then the post was written that he was dog aggressive and would be euthanized in 9 days.
That’s where we came in and first and foremost Mr. Ricky Barnes was contacted and asked if he would escort this big boy from Massachusetts, Ricky was in Las Vegas at the time scheduled to come home the following day and Ricky being Ricky he said I’d love to uber The Duke!
So we put Ricky in touch with his owner who was so very gracious and so very grateful that we were here to help. Arrangements were made and Ricky flew into Boston late yesterday and this morning went to pick this very handsome boy up. He is a very big, very handsome boy weighing in at 135 pounds and from photos anyway he doesn’t appear to be overweight, he’s just a big beautiful bear who is now on his third try for a forever home.
When I read a dogs history like his I am puzzled how a dog gets labeled as “Dog Aggressive” of course we Wille valuate him ourself but he has never been in a dog fight, and he has never injured a dog, playing rough with a dog with bad hips doesn’t count as aggression. Killing rabbits and squirrels doesn’t either.
We will figure it out ourselves and once again we will be on the hunt for a unicorn home if that is what he indeed needs and if that’s the case we are going to need your help. You did it with Zeke and I’ms are you would be happy to do it with The Duke too.
Ricky is on his way now and will not arrive until later this weekend sometime and I’m sure he will check in with us along the way while him and the Duke come into Texas.

It’s early but I don’t care we are going to begin talking about The Duke right away. He will go see Dr. Reno tomorrow but we don’t think there will be any serious medical issues, he was well cared for in his home. He is already neutered and getting him checked out is just part of our protocol.
Travis went down and got an initial assessment of The Duke and this is what he determined in about 5 minutes of watching how he behaved with meeting Inez.
“Duke looks like an only dog home. Lots of rude intensity on leash. No manners towards other dogs wants to dart after them and pull you down and will require someone who can handle him when he’s out in the world where other dogs are present because he is very strong and very bullheaded”
Ricky said he was a great companion on his road trip, is housebroken and was a great good natured big beautiful boy. He was a lovely pet for the family who just had to give him up due to his behavior with other dogs. Travis is going to work with him a little more with one of his own dogs, Inez was very afraid of him and we don’t want that.
It does look very likely that we will be searching for that unicorn home that we had to look for with Zeke. We will need your help to begin that process, he has no shortage of glorious looks, he is a very big boy at 135 pounds but he is strong and he is stubborn which is very typical of this breed.
Let’s start this sharing process, with what we know, Duke is 5 years old, he is neutered, he has killed a bunny and squirrels out in his yard so he’s got great hunting skills, he would not be placed in a home where people have small fluffy things like cats, hamsters or rabbits as pets.
We will seek out ideally a breed experienced home, a person who is strong enough to handle a large breed 135 pound Bordeaux and we will be looking for an only dog home. Ideally we find a family who had a Mastiff, loves the breed and has lost their family member and would love to welcome this beautiful boy into their life.
Would you please share him so we can start this process sooner rather than later. Duke is at the sanctuary and he is a little lost with not knowing where his family has gone, just like Zeke was and we really hope to find him a new family as soon as possible. 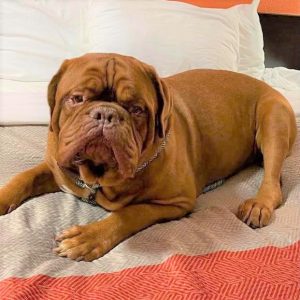 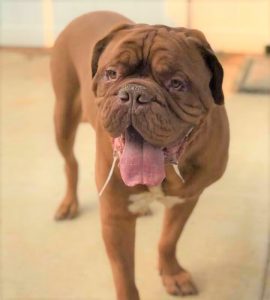 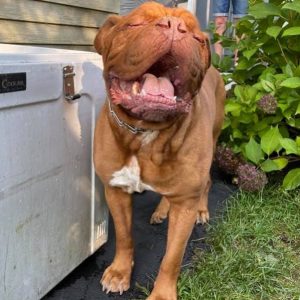