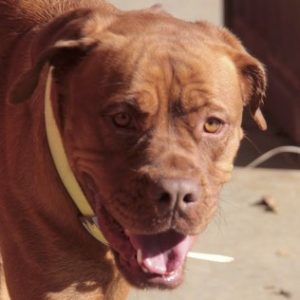 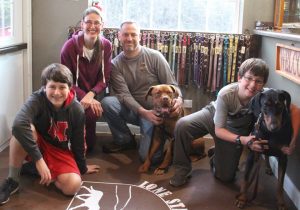 When she was picked up from a backyard breeder who had been selling her puppies on Craigslist the mama dog now known as Eleanor was being given away for free to whomever, and of course she was not spayed, the last thing the person said was don’t let her around cats or chickens she can’t be trusted.

Eleanor came to us and was just a gentle soul, she went home with Wes to recover from her spay and she stayed with 3 cats. Wes said I don’t think a dog could be any better with cats than this girl is. She literally has no interest in them whatsoever.

We got an email from a previous adoptive family, you might remember Dodger Dog, the tiny (Dachshund pup that grew into a Doberman)
They told us that they were interested in Eleanor but it was hard for them to make a decision because Dodger Dog is in fact the perfect dog, and they don’t think that any dog could compare to him, but they think he would like to have a friend. They wanted to know if Eleanor was mischievous, got into any trouble, was okay with a cat etc. etc…

Wes filled them in on what he experienced and they said they would like to take Eleanor home for a trial run. The updates we got through the weekend were hilarious and demonstrated that Eleanor was also the perfect dog. They said she was nothing but well behaved and she met that cat and he might as well have been a piece of furniture as she casually walked on by.

This morning they confirmed that Eleanor now known as Ellie is home with the Huettner Family from Fairview Texas.

We wish you the happiest life ever sweet girl, we are so happy you’re safe and loved. 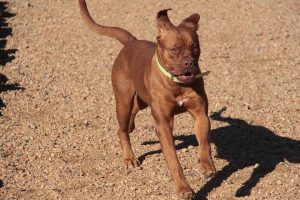 We don’t know a lot about this little red bears background, all I do know is she belonged to a backyard breeder who bed her, sold her pups on Craigslist and didn’t want her anymore and gave her away for free.

She’s two years old and on the small side, guessing 75 pounds, she’s kind of shy, and sweet and has done very well with introductions and other dogs. She may not be wanted elsewhere in her previous life but she will be wanted in her new life.