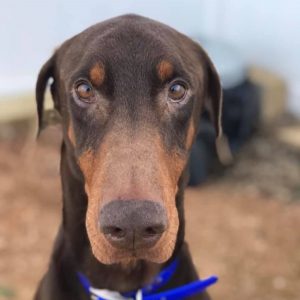 We saw a post pop up at about 2:00pm this afternoon from our friends at DAS:

🚒🚑🚓 Emergency Rescue 🚓🚑🚒
Elijah A1095917
4 years old
Neutered
HW low positive
Due out 03 – 03 – 20
Elijah came back to us as a return due to him being ill. Elijah lost around 30 lbs in his home. His new owners could not afford his medical cost. Elijah needs a plan commitment by 4pm today and to be out of the shelter by 5pm. If you can help Elijah, please send your tag to DASrescue@dallascityhall.com

We had about 2 hrs to act to save this poor dog, the other Doberman rescues who were already contacted about him weren’t able to get him in that time frame – and we didn’t know if we could either.

We don’t know what happened in his previous home, we don’t know how or why he lost 30lbs or over what span of time that happened, we don’t know if he’s sick or dying or malnourished or just plain neglected, but Ricky is rolling into the ER with him in the next few minutes – complete with IV bag from the good people at DAS and everything.

When you spring into action rescuing a dog all you have is the basic information presented to you. What we knew was this Doberman found himself in Dallas Animal Services back on 2/13. The paperwork shows he was adopted on that date and he weighed 78 pounds.

Yesterday, whomever this person was that adopted him returned him on 3/3 stating he was sick and they didn’t have any money to treat him. Yesterday he weighed 56 pounds.

He has pneumonia, which we knew but we didn’t know why he would have lost 22 pounds. Ricky picked him up and rushed him over to the ER and we waited for them to go to work on him and find out if anything else was going on. In the meantime, he was placed into oxygen and started on multiple medications for pneumonia. This morning Dr. Rolfe took over his case and he called me to tell me he is heart worm positive, he is loaded with worms and parasites, his pancreatic enzymes are elevated, but nothing outrageous and nothing that would point to this kind of weight loss. They performed an ultrasound on him to see if they saw anything out of the ordinary inside of him, which they did not.

Dr. Rolfe said they have fed him tiny meals many times throughout the day and he happily and readily eats his food and he keeps it down.

So Dr. Rolfe felt the only logical conclusion was pretty simple. He didn’t get any food. The requirements to adopt at most shelters are nominal, you fill out paperwork and pay a few bucks and off you go. This dog has heart worms but the shelters cannot afford to treat. Obviously, this adopter either didn’t have the money to take care of him or they just didn’t want to. For a dog to lose 22 pounds in 3 weeks is obviously very alarming. Now I know when Olivia got sick with pneumonia, the weight immediately started falling off of her and I’m sure it contributed to his weight loss.

However it went, for whatever reason it happened, the buck stops here.

Elijah will never face a critical encounter with his life ever again. He will remain hospitalized for now until we are certain that he is well enough to be discharged and have his care taken over by us.

He is safe and well cared for, and more importantly will get plenty of good food along with his medicine and will regain the 22 pounds he desperately needs.

I’ll say good night with you saying hello to Elijah. The call came today that he was stable and needed to come out of the hospital. Mr. Ricky Barnes happily drove to Animal diagnostic Clinic and escorted him out of the hospItal and drove him to the sanctuary. He looks like a very weary boy who needs to rest and we will make sure he gets that. He will have plenty of good food to eat as we work to get the 20 plus pounds back on him. Travis went down to say hello and texted us that this boy is a “winner winner chicken dinner” which means he is a great dog. As you can see, dogs that are rescued like this boy was, out of the shelter with 30 minutes left to his life before being euthanized, never forget the person who came for them, which of course was Ricky. 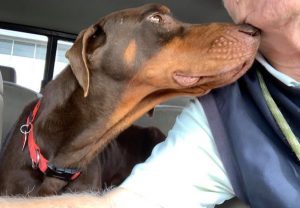 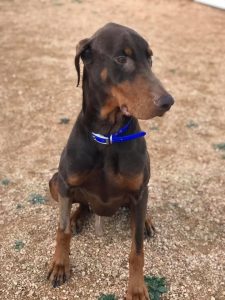