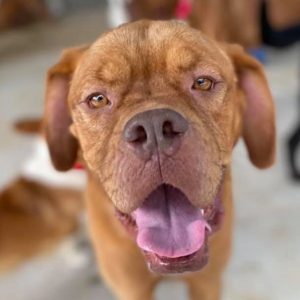 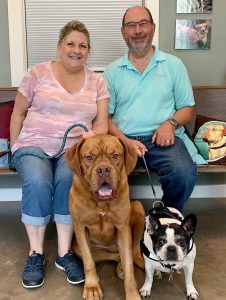 What a great story this has been and now its gone full circle…
Fiona, the stray in Frisco, that eluded capture for 6 weeks, has captured the hearts of Cindy and Tim Cole from Northlake, Texas.
Cindy and Tim are followers of the page and have been interested in the Bordeaux breed for a while. They have experience with large breeds, having had a Great Dane in the past, and thought Fiona would be a great starter Bear for their family. Fiona will have an 8 year old Frenchie sister named Tessa to show her the ropes at home. Cindy and Tim also recently bought some property and are building a new home that will have a large yard with a special courtyard and indoor play area designed specifically for Fiona and Tessa. They are tossing around a few ideas for names but want to spend some time with Fiona to see what fits. They promised to update us with her new name on the Happy Tails page.
Happy life sweet Fiona!
About Fiona:
We were contacted about this girl a couple of days ago, at that time we didn’t know if it was a male or a female. Apparently she has been out running as a stray around this area in Frisco for 6 weeks. She was caught on security cameras multiple times and you can clearly see that at one point she was an overweight dog. Duck Team 6 was called in to trap her once they knew she had a rescue that would take her. She was trapped late last night and Jessica drove over to pick her up, she spent the night at Jessica’s house and this morning she was taken to the sanctuary. She is much thinner, not emaciated by any means but she had a lot of fat on her to start.
Her photo of her roaming the neighborhoods we are told was shared to many lost and found pages all the way up to Oklahoma and nobody has stepped forward.
I want to emphasize that this dog is someone’s pet, she had a collar on that I won’t describe for identification purposes, she is young, about 2, she is spayed, has never had puppies, she knows how to sit and down, she is low key and sweet. We will notify Collin County, Denton County, Grayson County and Tarrant County in case she has traveled far.
What I need from you is to share this post as far and wide as possible, if she has an owner maybe we can find them.

For now we will just call her Fiona, as that’s what the trapping team called her last night.

We didn’t know if Fiona was spayed or not so she had an ultrasound today to see. We simply will not cut dogs open to find out so its the route we go to save them from having to do that. Fiona was in fact already spayed and therefore didn’t need to be cut open.
Fiona was clearly someone’s dog but her owners just didn’t step forward and claim her. She was running as a stray for 6 weeks and was finally trapped and caught by Duck Team 6 and was handed over to us to take her in.
She is adorable, well mannered and we are now looking for applications for this sweet girl. Wonderful first time Bordeaux for some one and Bordeaux lovers everywhere would love to have a girl like her.

Nobody has come forward for Fiona, it seems there isn’t a soul looking for her which is shocking. She will be off to see Dr. Reno this week and see what her medical needs are and then we move on to finding her a forever home that will in fact love her forever. 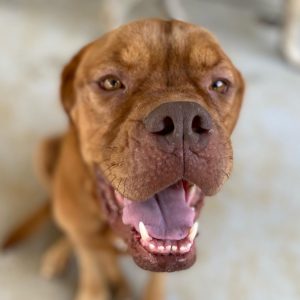