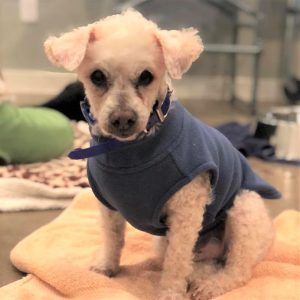 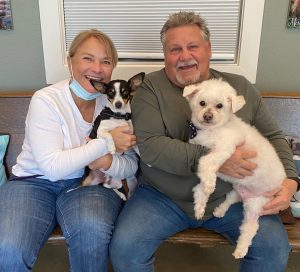 Jeanne Brock and Peter De Vries from Hot Spring Village, Arkansas celebrated their wedding anniversary in the best way, they adopted our dapper little bichon frise, Fitzgerald.
Fitz has come a very long way since he was rescued from the Valley severely matted. He was so matted that we were originally told he was a girl and was named Ella Fitzgerald until he arrived and we soon figured out he would just be known as Fitzgerald or Fitz for short.
Jeanne and Peter have a rescue chihuahua named Mia that also came from the valley so Fitz will now have a sister to play with! They also host get togethers at their home and all their friends bring their dogs over to play in their fenced in yard. We know Fitzgerald will have the time of his life!
Fitz will now be known as Sir Snickle Fritz or Fritz for short. A man this special needed an extra special name so Jeanne and Peter made sure of that.
The family is already on Happy Tails so they will be sure to post plenty of updates for us
About Fitzgerald:
This little boy has had a rough life, and that will now change forever. He is a miniature poodle who is now pulled out of a shelter in the valley and his life has changed forever.

UPDATE 2/2/2021
We never know what a rescue will show us, especially these very senior rescues. Fitzgerald came to us completely covered in matted hair, they couldn’t even tell if he was a boy or a girl. Turns out he is a neutered male, somebody cared enough to neuter him at some point in his life.
Fitz is feeling much better now, he is on two heart medications for his heart. He had the surgery to remove the very large bladder stones and one trapped in his urethra so he is feeling much relief from that being gone. He will need to be on a special diet so he doesn’t develop those again. Once again like so many of the others in this group he is an old man…..but he saw the volunteers with a tennis ball today and just like with Coltrane and a leash we could see signs of their previous life way back when someone cared about him. He might be old but he still wants to play a game of ball.
Fitz will require a very special adopter, one who understands the word rescue at it’s finest, just like with Coltrane, he needs a place to call his own for however many days he has left…and if you can play a game of ball he would like that too. 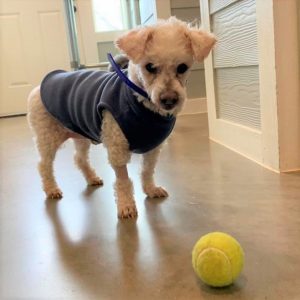 We got great news that Fitz has survived his surgery. The poor little man had one of the stones so stuck in his urethra that it took them a long time to get it out. The surgeon said the inside of his urethra was like cauliflower so tough and irritated from those stones being there for so very long. He had stones in his bladder as well. He’s now in recovery and doing well.

UPDATE 1/25/2021
Update on Fitzgerald in the ER with a catheter placed to make sure he can urinate. When he arrived at the ER he was blocked so its good that we got him there.
This is what we were told today about what is next.
Fitz has a grade 5/6 heart murmur with atrial enlargement and is not a good surgical candidate. He has 3 distinct stones in his bladder and additional stones in his urethra. DVSC is discussing it, but we are left with no choice about surgery. We have to move forward knowing we could easily lose him during the procedure. He will be having surgery this afternoon.

Ideally he would be on heart meds for a week prior to surgery. Unfortunately, with his stones and blockage we cannot wait for that and instead we have to just hope and pray he can survive the surgery.

Fitzgerald has been rushed off to the ER. Here is the issue, Fitzgerald has a bad heart, he needs an echo but we can’t get him in there until Feb 17th. He also has bladder stones and need surgery but we are weighing which is the most worrisome, his bladder or his heart, he is a risk for surgery. The answer came to us today, he is constantly straining to pee and his urine is all blood. We cannot have him get completely blocked and therefore we now have to take him to the ER and perhaps take him to surgery anyway and hope his heart can survive. The ER told us they will start him on a catheter to immediately get him some relief and Dr. Rolfe will take over his care tomorrow morning and determine if we have to get him to surgery and get these stones removed, in which he would then be handed over to our surgeons and try and solve this and hope he survives surgery.

In the continuing story line of valley dogs rescued from the shelter with numerous medical issues. Fitzgerald has been examined and unfortunately he has a bad heart like Coltrane and will be going in to an echo too. In addition he has bladder stones and a mouth full of rotten teeth. We can’t take him to surgery until we find more about his heart and get him on some medication that he needs.

He’s a sweet old man but once again will require a special adopter willing to take on his needs.

UPDATE 1/20/2021
Imagine, one day your in a kill shelter in the valley, covered in mats and not one ounce of hope that you will survive. Boom, in comes a savior, you get in a car and drive hundreds and hundreds of miles, you arrive at this place that is clean, and beautiful and filled with loving caring people. You get a shave, a scrub, some warm comfy pajamas, regular food, a nice bed with a soft blanket, the heat is on and these volunteers love you and hold you and hug you.
That’s what rescue feels like and Fitzgerald is reaping the rewards of being so incredibly lucky.

Remember how Ella Fitzgerald looked before arriving?
Well, it turns out Ella Fitzgerald has a penis under all of that hair so he will now be known as Fitzgerald and we’ve scratched the Ella off of his name. He looks to us to be maybe a Bichon Mix, his little legs are short and think like a Bichon.
He is already neutered and he is an old guy, he’s a good boy and feeling so much better to be clean and groomed. 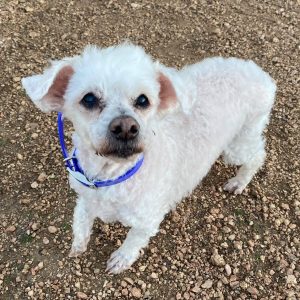