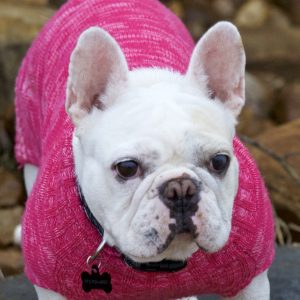 We are all so happy about this darling girl’s adoption!

We were contacted by Linda Rooney who adopted my Fernie, and the oh so lovely Scone, saying she wanted to add to her Frenchie brigade and asked us who would be a good fit. I instantly knew it would be Flo. She will be living with her sisters in Cheyenne, Wyoming, and we couldn’t be more thrilled.

Stay tuned to the Happy Tails page for the announcement of her name but for now I’m thrilled to wish her a very happy healthy new life! 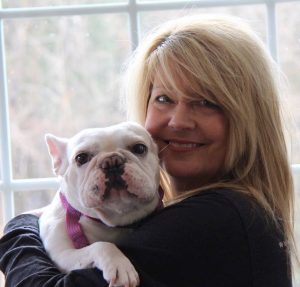 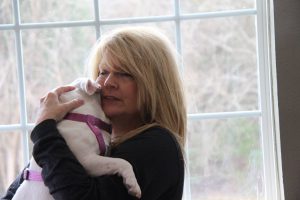 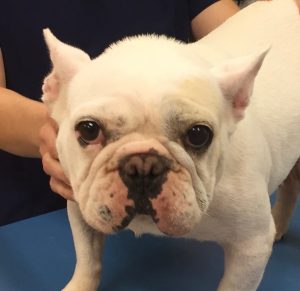 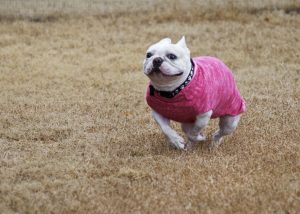 We took Flo into our rescue back in October of 2016 with some very grim fears about her health – a very thickened bumpy vaginal floor – cancer was suspected and feared. We consulted with Dr. Rolfe and he suggested a scope, which we did. A biopsy was done and we were thrilled to have it come back with no evidence of cancer.
During her recovery, she suffered a catastrophic eye injury that became badly infected and was rushed into surgery to repair her eye. Foster mom Sherry has been caring for her ever since and has taken her to all of her appointments and her eye thankfully has healed very nicely and she still has vision in her eye.

Flo is precious, sweet and just a very good girl and we were so happy about this outcome.

I can’t tell you how happy I was to get this update about Flo today. You might remember we originally felt that she had a very serious cancer in her vaginal floor. It was huge and bumpy and we sent her in for a scope and biopsy a couple of months ago but no cancer was found. We spayed her and were told to wait for the hormones to slow down and hopefully take the swelling down and then we would scope her again in in case we couldn’t access the tissue deep enough where cancer could be hiding.
During the waiting period she suffered a catastrophic eye injury where she nearly lost her eye. Foster mom Sherry has taken such very good careful care of her nursing the eye back to health while we waited for the next scope and biopsy of her vaginal wall which was today. Dr. Rolfe performed the scope and said he did not see anything that worried him, which was the most fantastic thing that we could hear.

He took biopsies just in case, but we feel like we are in the home stretch with Flo being able to move on to a forever home without a terminal diagnosis. She has an appointment next week at the Eye Institute to see where we are with the healing of her eye, so far it has done very well, and healed far better than the doctors could have hoped.

I’m going to put a shout out now that I never knew if we would get to for applications to adopt Flo. she’s 6 years old, she’s absolutely wonderful with everyone and everything, and someone will be very lucky sometime soon to call her their own little dog.