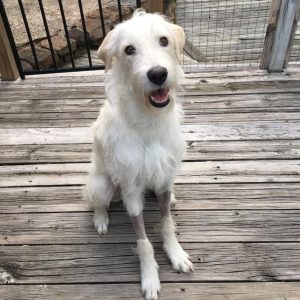 Age: Young
Breed: Mixed Breed
Sex: Female
Weight: 56.8 pounds
Kids: Not Tested
Cats: Not Tested
Dogs: Good
Fenced Yard:
Location: Anna, Texas
Special Needs:
About Florence:
There are some stories that occur at Dog Ranch Rescue that everyone loves, and there are other stories that hurt your heart. This story will fall into the latter category and I’m going to explain it in detail so that you can understand.
First and foremost our concern for any dog is always the dogs well being, what is best for the dog is number one in our book. With that being said you might remember Florence the Doodle that came into the ER many weeks ago very sick with what was unknown if it was a blockage or something else. The owners could not afford her medical expenses and the ER called and asked if we would take her into our rescue instead of her having to be euthanized, this was one of those times where we felt like it would be very kind to pay the dogs expenses and let the family take her home.
We did just that, Florence didn’t have an obstruction she had a twist and needed emergency surgery to save her life. She continued with terrible diarrhea and struggled to get well while being hospitalized for many days after that. The medical bills for Florence were over 10,000 and the village paid the bill. Florence recovered and went back home with her family.
Yesterday the family notified us that Florence was sick again, refusing to eat, lethargic and trying to poop but nothing happening. They expressed their concern but once again they were in a position of Florence being sick and they are unable to pay for medical care for her.
I’m sure you understand where this story is going, when you have a pet and you are unable to take care of them that becomes a problem when they need medical care. The gift of saving Florences life was not something we could do over and over again throughout her lifetime so decisions had to be made. Laura called her on the phone and explained that there are only a few options, first you can try and wait it out and see if Florence feels better on her own which is a pretty scary thing to do with a dog that has already lost a lot of her intestines from her previous surgery. If she had twisted again time would be critical. Second would be to let dog Ranch Rescue take over for Florence and see if we can fix the problem but with that the decision would come with the caveat of surrendering her.
Remember what I said ” the welfare of the dog has to come first” its very important to understand that we cannot continuously take care of a dog over and over again when the owner cannot afford to without recognizing the dog needs to be in a home with a family that can.
Education is very important to us at Dog Ranch Rescue and this is one of those times that we have to educate everyone on why we cannot continue to do that and instead we have to act on behalf of the dog and take her into the rescue and find a new home for her. It hurts our hearts for the family, Laura said they understood and agreed they have to do what is right for Florence.
Last nigh she was taken back to the ER and surrendered to us, her diagnostic testing is underway, right now her x-rays show some concerns perhaps its a blockage perhaps its scar tissue from her previous surgery we don’t know just yet. Dr. Rolfe will take over this morning and begin with an ultrasound and perhaps she might need a barium study to see what is going on, if she needs exploratory surgery then that is what we will do.
Her expenses will once again be on us and on the village to pay for regardless of what she needs, but this time Florence will stay with us, we hope she gets well and when and if she does we will seek out a new family for her. Rescue is hard, making decisions is hard, but sometimes the hard decisions we need to make we feel are the right ones, and Florence needs the right decision for her right now and not for any of our hurt hearts..

I will update on her condition as I learn more…

A little update about Florence from foster mom Alyssa. A few tips about gear to use when walking and controlling your dog on a podcast can go along way.
“Just want to shout out to the Edens!

I post about a harness then there’s a podcast on a similar topic. I can do the math, I need to listen to the podcast.

Florence looks to me for cues inside, but walks have just been really difficult bc there are too many distractions. She can get over-excited and we happen to live in a neighborhood with lots of rabbits, squirrels and other people walking dogs. Florence needs the exercise of a walk but I was coming home frustrated a lot. I tried the slip lead and I tried the harness and I just thought I had more control with the harness. So I *finally* get the chance to listen to the podcast yesterday morning and realize the issue with the slip lead is user-error. In addition to the podcast, I watch a bunch of YouTube videos and we practice around the house and in the backyard. We went on our first official walk with the slip lead where I actually know what I’m doing this morning …. and it was fantastic! We both still have some learning to do but I believe things will be night and day moving forward! Thank you!! (and Ken is currently shopping for a slip lead for our dog 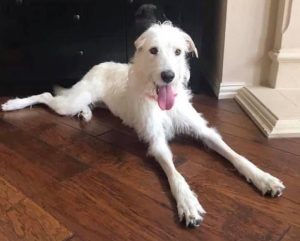 Millie is caring for Florence after her very big surgery. She has sent us an update about this sweet girl:
Florence is such a sweet girl.. hoping this surgery will have done the trick and she can go on to lead a happy life.
I’m in and out of her room and check the camera often .. she is leaving her incision alone so we’ve been leaving the cone off during the day and only have it on at night.

She barked at the donkeys a few times but has decided they’re ok and will just watch them when we go out. I’m feeding her 3x’s a day in hopes of putting a little weight on. She’s taking her medicine without any problems and will sit and wait for me to put her food down. Such a good girl. She now has an open crate during the day but I do keep an eye on her though the camera. She’ll look around, pick up a toy and play or chew her Nyla bone. Next thing I know she’s back sleeping in the open crate or in the middle of the room. Florence is tall and very beautiful. Her coat is coarse and wiry except for the ears which are super smooth and silky. What a gorgeous dog!

Today was the day for Florence to check out of the hospital, she is doing well, happy and eating. Millie will take her home but when she went to pick her up she was informed that Florence is dog aggressive and growls and snaps toward any dog coming near her. Millie called as she was pulling away and told us what she was told. I said just drive that girl over to the ranch and let us decide who is she. You see how a dog behaves with a barrier in between them and another dog is no true indicator of their behavior or who they are. Every dog is so very brave with a fence or a cage door in front of them..
As we suspected this is Florence in the office where she was able to meet Irene and Sir Frederick and Sweeps. Not a hint of aggressive behavior just a dog with no experience and a little overwhelmed.
As I get a closer look at this dog and can see more of her this dog isn’t a doodle at all, she looks like a Wolfhound, I can’t say she’s purebred as she is small at 60 pounds but she clearly has Wolfhound in her and not Poodle.
Off she goes to stay with Millie where she needs to be monitored for the next 4 to 6 weeks and see if she has anymore issues with her intestines behaving oddly and causing her to be rushed to surgery again, hopefully not as if this becomes a chronic issue she simply will not survive, you cannot continue to remove intestines without coming to the end.

Let’s all hope and pray that is not the case.

Dr Bronstadt called me this morning and was very worried about her intestines and wasn’t quite sure what was happening in there but things were not functioning normally. We then handed her over to Dr Wilkins who took her to surgery right away. He called me a few hours later and said that she had about 11 inches of dead intestine and it looked like her intestine had got caught up in some adhesions that she had from her first surgery causing them to not function normally. She had already had quite a bit of intestine removed the first time but Dr Wilkins felt confident that she still has enough after removing 13 inches so she won’t suffer from short bowel syndrome. She will remain hospitalized until she’s stable enough to go home. He was able to spay her as well as her owners had not ever taken care of that. He recommended that she stay with the rescue for 4 to 6 weeks just to see if any more issues develop with her intestine as this has been a peculiar issue that could be a pattern for her. We will be seeking a long term foster for her as she recovers and we hope this is the end of this intestinal emergency situation for her.