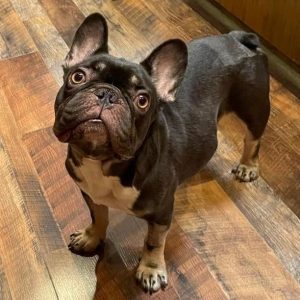 Libby and Len Karabin used to have 5 dogs… 4 frenchies and a Great Dane (Stanley). They lost their frenchy Norman December 2020 to a brain tumor. lost Olive in April this year and just recently lost Oliver to a stroke. They had that empty feeling a lot of us know all too well. Then they saw Lambie. They knew they wanted her instantly. They weren’t afraid of possible medical issues because they had dealt with most of them. They were willing to wait as long and it took. Len works from home which will help with the transition. Plus they came highly recommended by a previous DRR adopter. So that was that.. adoption pending. But then little Frankie hit the page and tugged at their heart. Their current French Bulldog, Maggie had also had a rectum prolapse and they knew what it entailed and were willing to take it on. Lambie and Frankie just happened to be fostered together and just absolutely adored each other and were the best of friends. Of course pictures of Lambie and Frankie together just stirred the pot you might say. The rest is history.
Today Libby and Len drove up from Round Rock, TX to adopt both Lambie and Frankie. Lambie’s new name will be “Ruby” and Frankie will be “ Fritz”. I have a feeling we will be seeing lots of updates on these two! Can’t wait!!
About Frankie:
We became aware of this little boy late yesterday. Posted with a rectal prolapse that has been out for a couple of days. Stated they couldn’t find a vet or an ER to help.

Selling him for 50.00, I’m going to say nothing more because I’ve got nothing positive to say about that except with the help of village members Kelly and Katie he was picked up from there and driven straight to the ER where they went to work on him. This is not his first prolapse we’ve been told and it’s very important to understand that you have limited time to get this back inside before the tissue starts to die and the dog cannot be saved. With this out 2 days already we knew that he may not make it.
The ER worked on him last night with no luck getting it back in, all they could do at that point is try and ease his pain, keep it hydrated and moist and turn him over to our surgeons at DVSC.
That’s what took place this morning, he is being prepped for surgery to attempt to out it back in, if they can a Colopexy will be done to suture it in place inside his body to his lower abdominal wall to keep this from happening again.
I don’t know if he will live, but we will try everything to save his life.

Millie sending us a very good update on Frankie after the huge surgery to put his rectal prolapse back in place.
Just a short update on Frankie.. he is a character that’s all I can say. That little tongue is always out … he’s found his voice and has a deep bark and likes to tell me to hurry up with his food at meal times. Total bone hoarder .. at any time he’ll have 5-6 all around him. He loves to play and be in the middle of anything going on. Sleeps soundly all night in his crate with no accidents. Goes out with the other dogs during the day like a big dog. Those eyes….they pull you in and tug at your heart.

Frankie’s surgery seems to be holding .. he’s eating Royal Canin adult canned dog food and eats just over a can a day with no diarrhea or extreme straining. He’s just one Happy Camper and is an absolute doll to foster.

Mr Frankie is a hoot!! Very inquisitive, funny and is ready to rock and roll! His little tail butt is no longer sore but still has loose stool with a little diarrhea. He has a very interesting poop dance and we’ll just leave it at that. Frankie has better control on when he goes so the accidents have cut way back. He struts along when he walks like a big man. Lifts his leg way up when he pees and has to kick half the yard away after he does his business.
Frankie came out and met the gang today and made a point to mark every spot he could in the yard. Everyone got along fine.. We just hit the 2 week mark for restricted activity and he was super happy to get the dreaded cone off.

Kate Dees, who arranged the owner surrender and transported Frankie, sent him a really cool bed and blanket along with a chew bone and a Kong lion. The lion has already become his favorite.

Millie has little Frankie at home, he’s on a ton of meds as you can imagine, still struggling with a little bit of diarrhea, he does not want Millie to touch his tush but he has meds that need to be applied directly so she’s working on gaining his confidence for that so he doesn’t feel like he needs to snap at her.

Frankie remains in the hospital with explosive diarrhea, he is feeling good and eating good, we just need to get this diarrhea under control to send him off to Millie.
I try not to talk about stuff like this but some things just make me mad. a word to the people who sold him on Facebook, it’s best not to lie about what the situation is because our page has a lot of reach, and we did get contacted by the shelter who had him in June and offered to do the surgery if you would please surrender him, but you didn’t, you took him home to suffer some more.
The moral of the story is don’t lie, and don’t let dogs suffer because that’s ass.
I’ll stop ranting now, Frankie’s life was saved due to a village of like minded people who donated to save his life and that is the positive of this story..

We are hoping Frankie will be able to go stay at medical manor with Millie tomorrow, Dr. Murray says he’s sad and we don’t want that to go on for very long..

I spoke to Dr. Reaugh this morning as he was taking Frankie into surgery, he didn’t have high hopes with his rectum having been outside of his body so long and the tissue dying. I told him go for it anyway and we will hope for the best. He told me he would call me from the table if the outlook wasn’t going to be good and we could make a decision then. Several hours went by and no phone call which I felt was a good thing. Finally the call came and he did have good news, they were able to get it back inside and perform the colopexy to try and keep it from happening again. Of course it can still happen but we are going to focus on the positive and maybe ti will turn out okay. Millie will be fostering him when he gets released from the hospital, he will be there for a couple of days to manage his pain and let everything all down.
We will all rest a little easier knowing he is in recovery.