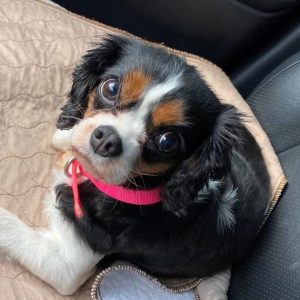 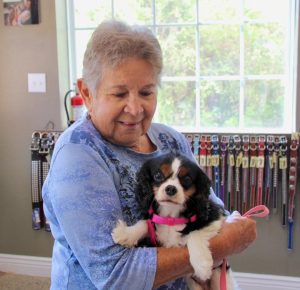 Pat Brewer from Georgetown, Texas came to adopt our little Gabbi who had a mass removed from her breast that appears to be cancer. Pat lives alone with no other dogs and is very lonely looking for a companion and we feel like Gabbi will be a wonderful little friend for her. Both ladies are breast cancer survivors and Pat will keep her name as Gabbi and love her for the rest of her days.

We need to find Gabbi an only dog home with no children.

I need to talk to you about this little cutie Gabbi, she is approximately 8 years old and is already spayed, she has a little mass on her belly that will be removed soon. She was surrendered to the shelter three different times and when you see that you know there is some kind of a problem.

No wounds inflicted but it is clear that this was at least part of the problem that caused her to lose her homes, one of the owners that surrendered her stated that she was “agitated’ around children, now this word “agitated” tells me that we will just flat out avoid her going to any home with kids. I have never met a Cavalier with behavior issues of any ind so this is a new one for us but it feels like we live in an alternate universe right now so I’m not going to be surprised about anything.

Our next thing we are looking for is her behavior with humans, right now we see nothing, she is very quiet at the ranch and minds her own business we are handling her to see if we get any kind of negative behavior from her but so far it seems that she is territorial in a home with other dogs, she takes ownership of her people and affection and won’t share with another dog.

We were asked if we could help with this little King Charles Cavalier from Dallas Animal Services.

This is what they told us:

“Today an owner returned a CKC spaniel that they had adopted from us back in January. During the surrender process the owner reported that her vet had diagnosed the dog with a tumor, but did not specify what type or the location of the tumor, but based on hand gestures staff thinks in the abdominal area. This was reported verbally, they did not provide any records from their veterinarian.

The owner who surrendered in January surrendered because she was having a baby and reported the pup was friendly with people, cats and dogs.

Our vet staff has not yet evaluated this pup. Until such time we can determine if the owner’s verbal history is correct, this dog is routed for “Rescue Only”.

We hope you will consider her for your program.”

We have no idea if there is something wrong with her, or if they just didn’t want her anymore, but we will get to the bottom of it. We told them we would be happy to help and Wes is on his way to pick her up from the shelter today.