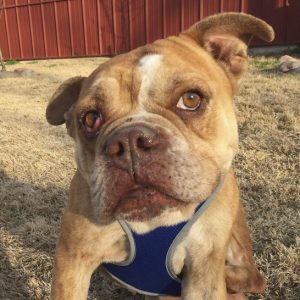 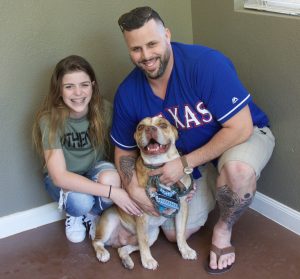 The time has finally come for Gary Bear to go on to his forever home. This is the first time for me to adopt out a dog to a friend I’ve known for years, and I know Paul will take very good care of him. Fostering a dog is a labor of love. It can take months to get a dog where they need to be and Gary was no exception. He went from living on a chain in the middle of nowhere Texas, being beat up on by other dogs, and not having a clue what love was before making it to the ranch. Gary Bear took his past in stride though and never looked back. He got his eye fixed, masses removed, peaches harvested, heart-worm treatment, and learned the proper way to love and act in a home the way every dog should. Although he’s a friend, Paul and his lovely daughter, Ava, still passed all the rigorous checks and balances of Lady Galloway to earn the love of this sweet boy. He now has a new home and an office job to tend to everyday. Happy life Gary Bear, me and the boys will miss ya.

We were told that he has lived his entire life outside tied up to this chain in Santa Fe, TX.
He is 8 years old, not neutered, completely emaciated, and has a cherry eye. We were told that he loves other dogs, kids and cats and Susan told us that his previous owner died unexpectedly and the owner’s sister then came to get to him to live in her backyard.
He initially was living out in her yard with five unsocialized Rhodesian Ridgebacks that were kept that way to make them better watch dogs on the property, the problem is they beat him up over and over again even though he completely submitted to them.
So because of this after two months of him being beat up by her dogs the sister hooked him back up to his chain and tied him up to the back of the property to be alone and safe from the Rhodesians.
The sister then decided that he had no value and was good for nothing so she was going to post him up on Craigslist for free, we all know the dangers this poses especially for a bully breed.
This was when Susan reached out to us for help and none of us could say no to him.
Susan drove him all the way to us on Saturday and he was promptly placed in the tub to get two flea baths to remove the thousands of fleas off of his body.
Wes and Travis took some pictures of him getting his bath and told us while we were at the auction that this boy is an absolute sweetheart. He is great with all of the other dogs and is great with my granddaughters. He of course was a very hungry boy and it is clear that the task of feeding him was something that had been neglected.
He is heart worm positive after living his life outside on a chain but that’s okay, this horrible life that he has had ends now.
Welcome to Dog Ranch Rescue, Gary. 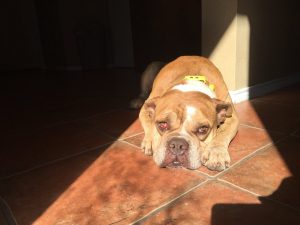