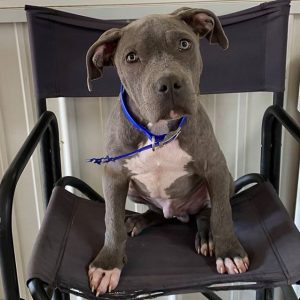 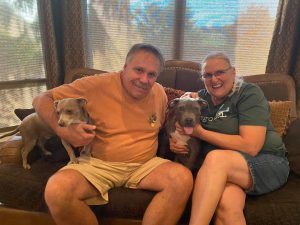 Gator Gilpin has blossomed before our eyes and today was his special day. Gator has headed off to live with Todd and Cindy Jackson in Celina, TX. He will have plenty of yard to explore and three new brothers to run around with. A Pittie mix named Kingston, a Chihuahua named Buddy and an Italian Greyhound named Blue. Todd and Cindy are retired so they have time to devote to Gator, watch him grow up as a puppy and fit into their pack. They love to take RV trips and they were happy to hear Gator is a good traveler in the car so he can ride along on the next one. His name will stay Gator and they will keep us updated on the Happy Tails page. He will never go hungry again and will be spoiled the rest of his days.

We were contacted about this little boy that was walking down a street near Mansfield Texas with cars just whizzing past him and nobody stopping to help except for the person who contacted us. He is on his way to the ER now and we will be getting him the care he obviously desperately needs.

He will be named after a truck driver in Ohio named Gator Gilpin.

Welcome to Dog Ranch Rescue Gator, your worries are far behind you now…

Let me give you the latest update we have on Gator. He is still in the ER they called us last night because he was having a hard time breathing last and they suspected pneumonia but xrays ruled that out. He still had white spots on his lungs so no one really knows what’s going on with no one with his lungs just yet. He will be spending another night and we may determine that Dr Rolfe needs to take a look at him to get his opinion.

We had Dr. Rolfe take a peek at Gator yesterday and he feels that he does have some pneumonia so we have kept him hospitalized on fluids and antibiotics. This morning they gave us a good update and said Gator is doing great, he’s eating and holding steady, his lungs sound good, and they are going to transition to oral antibiotics today and see how he does.

Gator has arrived out of the ER and is now at the Ranch for a couple of days. We will send him to be fostered by Christi on Monday.

He’s just a baby, maybe 5 months old, not a speck of hair on him except the tip of his tail. He is a little Pittie Mix and his color will be blue, his lips are dark and his tail hair is blue. His poor little feet are so swollen from infection and demodex. He is still emaciated and probably only weighs about 25 pounds and he’s very cold with no hair and just skin exposed.

We put a little coat on him and tucked him in under the counter on a bed and in the blink of an eye he went from a little shivering baby to a sleeping little man. 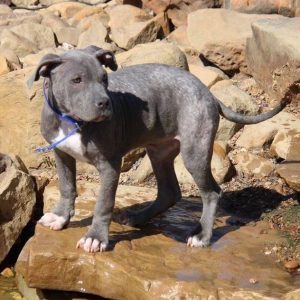 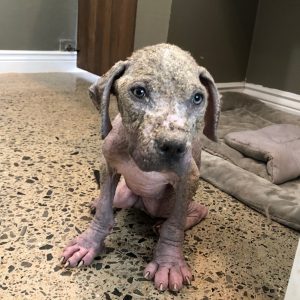