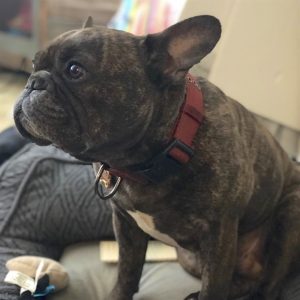 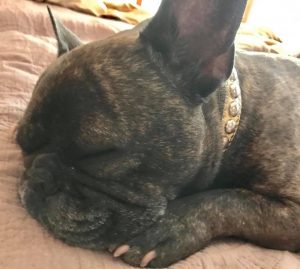 I knew I had to take him home. Quite honestly his reaction to me was the strongest – he remembered me because I was the one who raised his litter; Peggy is his mama and Bea his sister. He does remember me, and he has followed me everywhere I go since he was returned to the Ranch.

I kept trying to get him located in a home and Laura had an excellent one chosen for him, but I just knew that he had come full circle and that he was family.

He is a great dog, he does nothing wrong, he already goes for pack walks with no leash and does exactly what I tell him to do. He is a very loyal little man who loves to sit on your lap and he stares me straight in my eyes telling me he belongs here.

The family laughs, Jessica jokingly calls me a hoarder. People ask how my husband responds to adding another dog, he just belly laughed, you can’t have an easier spouse than mine when it comes to adding a dog. The Donkey has been a challenge, a stubborn mule he is, but we work through his issues and this is where he belongs too.

Gio’s name will not stay as that, we chose it because it rhymed with his name his original family of 6 years named him, but it just doesn’t fit for him, and it doesn’t fit for us. I know people get bothered by changing a dogs name but I assure you they couldn’t care less. We take care of thousands of dogs at the Ranch and literally the majority of them don’t even acknowledge you calling their name. My dogs all have several names and they respond to anything you want to call them.

Gio will be no different, and he will learn his new name too.

I told you that when this litter was born with 5 boys they were all named after men who had been named the sexiest men alive on People magazine. Gio’s name was George Clooney and we felt it best to take the whole thing full circle and call him George.

Welcome home, George, we are happy to have you back at the Ranch where you were born and where you will forever stay.

He is a handsome, 6 years old just like his sister the Queen. Son to my very own Peggy, he was adopted to a family in Reno, Nevada where he has lived his whole life.

We were contacted by them a few days ago because he is having medical issues with what they feel like is his kidneys but his family has fallen on hard financial times with a job change making them unable to afford his care and do right by him. They asked if we would take him into the rescue and of course we said yes. We will take care of every medical need he has and find him a new family who can afford to care for him in the future.

Mary Jones dropped everything to drive to Reno and bring Bea’s brother and Peggy’s son back to the Ranch where he began his life. He arrived and was reunited with them, and we will now be taking care of finding out what his medical needs are.

Welcome to the Rescue, Gio! 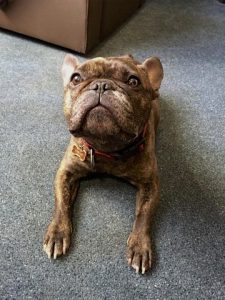