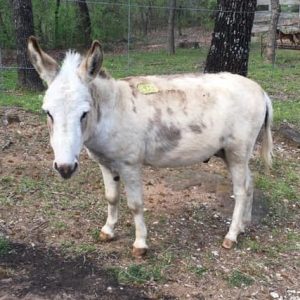 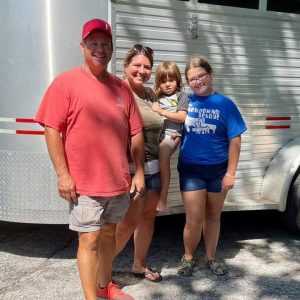 Rescue donkeys Biscuit and Gravy have been adopted by the Messenger family from Anna, TX. They are a super active family, involved in FFA and 4H, and love being outdoors with their animals. Kristina and Rick have 11 acres. Their 12 yr old daughter shows lambs and their 3 yr old son will be showing a goat this coming year. They are super excited to be adding Biscuit and Gravy to their family and look forward to continuing their training. (Gravy loaded pretty easily into the trailer but Biscuit took some extra encouragement.) They plan on keeping their names so watch for these two sweet donkeys on the happy tails page.

About Gravy:
Here we go again….
Millie has said she will continue rescuing donkeys for us so after Mavis and Skeeter were adopted we told her go ahead and see if you find others you want to rescue.
This is a world that I know very little about but clearly lots of you all do and apparently its quite despicable like most animal abuse in our country. I spent a little time with Millie on the phone today to try and understand how this all works and where these animals come from.
This is what I learned today. Apparently lots and lots of people have donkeys and horses that they don’t want anymore or they put donkeys out in their pasture without being castrated and more donkeys are born that are unwanted. People who have horses that are unwanted and or old and they want to “get rid of them” My most hated phrase.
There are groups of people who collect unwanted equines and try and market them for rescues or even regular people who want to buy them to save them. These are basically middle men in the disposal of unwanted equines out to make money off of them. Millie said the majority of all of these horses and donkeys don’t sell to people and or rescues and the ones that don’t sell are trucked up in crowded conditions where they are not fed or watered and trucked down to Mexico where they are crammed into pens with no food or water waiting to be slaughtered for dog food.
Clearly this is disgusting and we are only to help a tiny amount but for the ones that we do rescue, just like dogs they will get everything they need and Millie will care for them every day until they are ready for adoption and then if Millie is up to it then Dog Ranch Rescue will support and rescue a donkey or two again.
What we know about this pair is that they are a breeding pair, the female is supposed to be bred and they say heavy bred but Millie has pointed out that she is fat and she told me that people put donkeys out in a pasture with lots of spring grass that is very fattening for them and they can get overweight very quickly. The female has what is called a broken crest in her mane, apparently they can get that from being overfed and overweight. She says these donkeys have been owned by someone at some time because they are much more friendly than Mavis and Skeeter were and these two donkeys follow Millie around.
Millie will have the vet out on Thursday to look them over and maybe we will know if she is actually pregnant or not in the meantime the male will be castrated. No need for anymore unwanted donkeys.
These two donkeys are miniature donkeys and are very small it’s hard to tell by photos but mini donkeys are pretty little.
I’d like to welcome to Dog Ranch and sometimes Donkey rescue Biscuit and Gravy..
The female is Biscuit and you can recognize her by the brown that is on top of her back, and Gravy is the male who doesn’t have a brown saddle.
I will update you as we learn more bout them and they will be up on our website just like the dogs.

We had to pay the fee to rescue these donkeys which was 1,500, and then we had to pay for them to be transported from Louisiana to save their life and that was 800.00 dollars.

It was time for Gravy to be castrated and Millie brought us a little update about the donkey’s
“Gravy was castrated Friday evening.. he was getting a little too frisky with Biscuit to wait any longer. I caught him sniffing around her tail butt and boy did she give him a kick. Dr Spenser says the Jack (male) donkeys can try to push the females into heat even if they’re not quite ready.. they often get hurt because the female will sometimes kick them in the chest or head.. those males can be determined though and keep going back…..

He’s recovering and doing ok today. It’s a beautiful day and they’re both out enjoying the weather”

The vet has come to examine both Biscuit and Gravy. Millie will fill us in on the details about that.
“Donkey Vet check update….
Biscuit (female) is not pregnant (she is so friendly he was able to reach in and feel around) .. her broken crest is probably from being obese at one point.. she doesn’t have Cushings which is really good and I’m told she is about 13-14 years old .. no major wounds .. her muzzle is very scaly but easily treated… her eye does have a little cut below it but she also has a small red bubble like area on side of her eye which he is a little concerned about. We’re just going to keep an eye on it for now.
Gravy is about 4 years old .. good shape no major wounds.. We’ll need to wait a couple weeks to make sure he doesn’t break with anything and then we’ll quickly castrate him.
Both got their vaccinations and coggins and are doing really well. Even Dr Spenser said they were very sweet donkeys.
Biscuit is so affectionate. She follows me around the corral and stands right next to me while I’m cleaning the stall in the mornings…. just wants love and attention and of course maybe a cookie. Gravy is shy and still a little skittish but will come up to me and loves being rubbed under the muzzle. Buzz was even able to give them both pets the other night. This is an adorable pair of donkeys that must have had a family at one point. They so deserved to be saved and will make great companions for someone”
We are so happy to have been able to rescue them both and just like with Mavis and Skeeter Dog Ranch Rescue will pay all of their expenses and Laura will accept applications for them in the same way as we do for dogs.