Hansel has been fortunate enough to be living with his adoptive family after being so lovingly cared for by his foster mom, Linda. She wrote this about her experience with Hansel and his sister, Gretel, and how Hansel came to find his forever home:

“I was hesitant to offer to volunteer to foster H&G because I had to hand off Mulder to another foster. But we had a wonderful volunteer step up, so game on. When I brought them home, they were in such terrible looking shape that I sequestered myself in the house for a week, only leaving to get supplies. I am a worrier, and I was pretty worried one of them would go south on my watch, and I wasn’t going to let that happen.
That said, I talked to no one about them, after they were here for about 10 days, our favorite neighbors texted my husband John this question the next day :

‘Do you know any rescues that have German Shepherd puppies?’ You see, they had been looking for a GS puppy for some time, and found none in the shelters, and the GS rescues had multiple year waiting lists for puppies.
Matt and Jenny were at the PERFECT time in their lives to raise a puppy. Jenny is still home enough for the girls and a pup, and their girls, Lauren and Kelsey are at the perfect age to help raise him. They had absolutely NO IDEA we had two at our house……
When John called me and told me they asked him that, he thought they were messing with him… Clearly, they were not. We told them about H&G, and they snuck over the same night after they put the girls to bed to meet them. They wanted a male dog, as they have a 15 year old female rescue girl named Heidi..
Matt filled out the application the next morning, Laura screened and approved them, and the rest is history.
After his recheck and vaccines next week, he will have his forever home…. And an amazing home it is. His new name will be Asher, which means blessed, fortunate, and survivor….

They love him so much, and bonus, I get to watch him grow up!

How great is that??

Happy life little man, we’re so happy for you!! 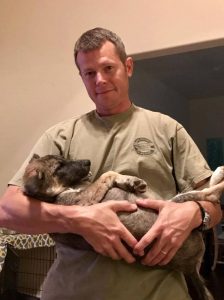 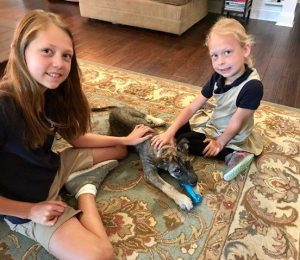 Hansel is one of three Shepherd-mix puppies that came into the Houston shelter as strays in excruciating physical condition. One of the babies was almost dead so the shelter compassionately euthanized him to end his suffering.
The two 13 week-old brother and sister, we were told, were covered in maggots, open sores, covered in demodex, and that the odor coming from them was horrific. We immediately tagged them and our Village volunteers jumped into action to transport them to an ER vet and ultimately to Dr. D.
There will be no more suffering for these babies. They are on the road to good health and living happily with foster Mom, Linda. They enjoy being outside and playing ball, and they are learning just how a happy puppy should live.
Welcome to Dog Ranch Rescue, Hansel and Gretel! 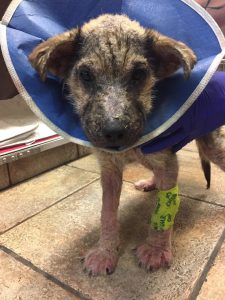