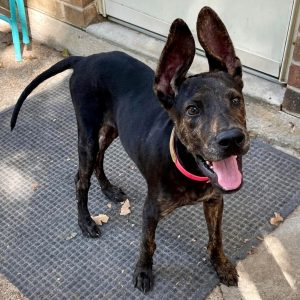 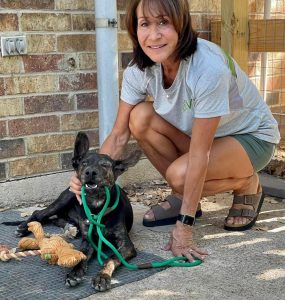 Groot was adopted today by Dee and Steve Strong from Highland Village, TX . Since they live close, they came by several times to meet with Groot while he was healing. They have an 11 yr Catahoula named Jay (a rescue) that also came and met Groot so they are already friends.
Dee is a pet sitter in her neighborhood and has cleared her calendar so she can devote the next couple weeks totally to Groot. Steve also works from home except when he has to travel so Groot will have plenty of help adjusting to his new life.
Both Dee and Steve wanted to rescue another dog that needed help. With Groot having such a hard start in life, they knew he was the one right away. He will be loved so much which is what he deserves. Dee got Groot a “Groot” toy and he was so excited it was a little hard getting a picture but, you get the idea. Oh, btw, his name will remain Groot!
Happy life, sweet boy. you deserve the best and you got it. See you on the Happy Tails page.
About Groot:
He came across on our rescue newsfeed and were told that transport from down in the valley was leaving in 15 minutes, if anyone can rescue him they will put him on the truck. Laura moved swiftly and in a matter of minutes this pup went straight from hell to winning the jackpot. He arrives in Plano at 7:00 pM tonight after driving all day long and Ricky will once again step up to complete the journey taking him from there to the ER to see if his leg is broken and get him comfortable and on some fluids and pain meds.
Poor little pup has had a very rough start to his life..

UPDATE 9/18/2022
Millie’s update on this baby boy that grows like a weed.
Groot went to see Dr Spenser this morning and weighed in at 29.6 lbs!! (Of course he had the harness on but still.. ) He got his boosters and the Dr said he’s healing well and I can give him a little more freedom.
Dr Spenser was also able to get a really good look at that left eye this morning. The cornea has actually ruptured and his lower lid has attached to the ruptured cornea. It will never be a viable eye and it will be removed when he gets neutered on Wednesday.
Groot is learning to walk with a leash which has been a little challenging hence the harness but we’re making progress. I walk him close to my side and add hill work so he uses the repaired leg.

He loves checking out everything and it helps him get rid of some of his puppy energy!

UPDATE 9/12/2022
Millie’s other foster Groot growing like a weed, look at this little man!
“Groot…
Today was a big day …off came the cone.
It’s hard to believe this is the same dog I got back on 8/10. He is silly, active and wants to play with everyone.
Groot still whines a little when first coming in with the other dogs. He also does some submissive peeing when trying to get them to play with him but over all he’s making great progress.
For a puppy he doesn’t need to go out much and really likes to sleep in so he is the last one up. He’s the first one fed then he finally goes out and does his business. He absolutely loves to play with his toys. All kinds of toys .. they all make him so happy!

You might say I have a toddler on my hands who keeps me busy and running when he’s out and about but his happiness is contagious!”

UPDATE 8/21/2022
Just wanted to do a quick update on Groot.. This little guy is growing like a weed. When I got him he was 14.8 lbs of skin and bones. Today he is 21.2 lbs, filling out and looking good. He wants to play so bad and get that dang cast off but no can do. He went in last Monday for the first of several bandage changes he’ll need. He had been doing good with the soft blue cone … it gave him more freedom but then he decided to chew the cast so we had to replace it with a plastic cone. He was not a happy camper.

Actually for being a puppy he has done really well. His cast is wrapped when we go out just to prevent it from getting accidentally peed on and keep it dry and clean. He’s a sweetheart. Loves belly rubs and treats and has only had one accident in his crate. 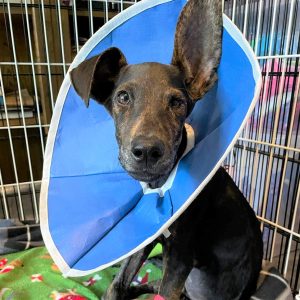 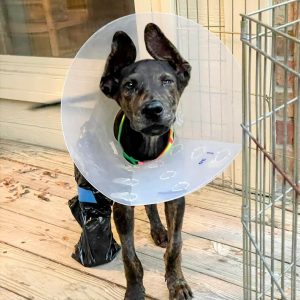 Groot is out of the hospital and now in the hands of Millie. His leg has been surgically repaired with a plate and screws. He has a hairline fracture on his other back leg In his ankle but Dr. Wilkins thinks it will heal on its own with him being just a young pup. Millie sent us this update about this little man who has had such a rough start.
Just a quick update on Groot..

The little man is settling in and resting. He drank a lot once he got here then immediately went to sleep. Cindy said he hadn’t peed at all and he still didn’t the first time I took him out but the next time he peed a river and I’m sure he felt a lot better. He wolfed his dinner down and I’ll be feeding him multiple times a day to get his weight up. The ER has him listed as 6 mos old and 14.8 lbs. Just a little guy! The surgical center said he should have some kind of cast cover to keep his cast dry and clean which might be hard with him so young. I’ve got a couple ordered that I’m going to try but until then I’m using a small garbage bag and it worked really well. He’s going to be on crate rest/restricted activity for quite some time. Lots of bandage changes then possibly physical therapy. He is super sweet and gave me kisses.

We got the update on Groot this morning. This poor little man has suffered tremendously.
The vet thinks he’s between 4-5 months old based on his teeth. His tibia is broken in 3 places and his fibula is broken in half. He’s on three IV pain meds and the vet said that made him so comfortable that he’s trying to stand now. She said he’s such a trooper for a young pup and just going with the flow of whatever needs to be done to him. His 4dx is negative, he is of course not neutered. He has hook worms. His Hematocrit was very low, if it drops any further he may need to be transfused. They are of course given the green light to give him anything he might need. He will be examined by the surgeons today and I should get a call with their thoughts on his leg, is it salvageable or would he do better with not having it at all.

I will update when I know more, but rest assured right now his pain is now a thing of the past.

Groot is out of surgery. The fracture has been repaired with a plate and screws and Dr Wilkins thinks he will do well. His other leg has a slight fracture in the ankle and he feels like it’s small enough it will heal on its own not requiring surgery. He’s very young and has that on his side to recover nicely. He will spend the night and then head over to medical manor with foster mom Millie.