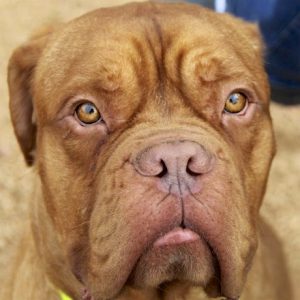 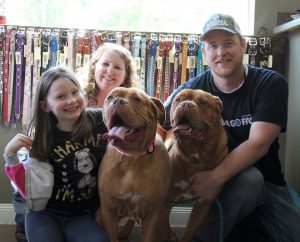 Sometimes you get a dog in that just touches your heart for what they seem to have lived through. This boy Gulliver is one of them, he came to us a psychological mess and needed lots of work which our entire family took on. He was spooky, he would bluff at you, he would almost bite you if you tried to touch him inside a den.

It didn’t matter, we could see who he was and with some time, some patience, some retooling of his fragile brain he began to shine, he is just a big goofball happy young boy who has learned to love everyone.

Today his new family came for him and Travis said he was just perfect with them even though he had never met them before. The old Gulliver meeting new people and bluffing at them and barking at them never appeared. Instead he was happy to meet them, happy to love them and he was clearly a new man..

You might remember this family, Jessica and Chase Amyett from Azle, TX who previously adopted our America now Merry. They lost their male DDB Steve this past year and really wanted to bring another male Bordeaux into their home. They read about Gulliver when Renee posted and immediately sent in their application to adopt him. He will have an 8 year old little girl to enjoy a very spoiled life with.

Full circle is where Gulliver has come, from a questionable start to his life to a very happy ending indeed.

We are sad to see you go goofy boy but so happy you will be forever loved.

We were contacted about this boy in Forney who was tied to a post at a vet clinic last night and left behind.
Laura spoke with them and they asked if we could please step in and take him. Travis has jumped in the car and is driving to pick him up now.

Travis told me he was a pretty spooky guy afraid of most things. The staff at the vet clinic where he was said he was pretty difficult to get in a run when he first came but they had worked with him and he was doing much better. We spent some time with him in the yard on a leash and introduced him to Bea and Georgia and he was just fine. He was a little electric when touched but he settled in quickly. We made nice bed for him in the lounge and when we put him up he was good until I went to take the leash off of him and he recoiled nervously. I reassured him that it was okay and he settled down.

Gulliver will stay at the Ranch with us as he needs more skilled hands on work than he can get at the sanctuary and we are happy to work with him and bring all of you along for the journey.

He’s going to be a great little Dogue De Bordeaux for someone. 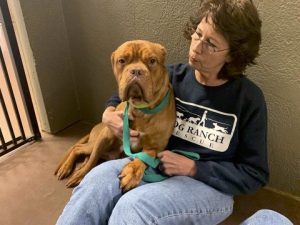 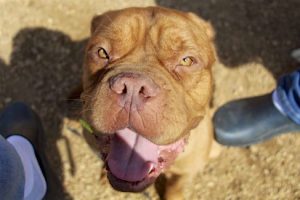