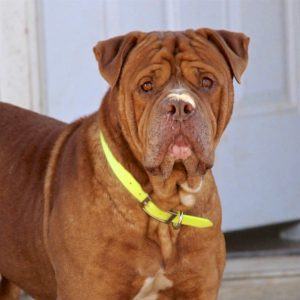 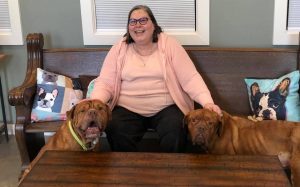 I’m going to close the night with one of the happiest adoptions that we have ever done. Guy Man and Charlotte have moved on to their forever lives with Gayla Crain.

We went over the full bags of medicine for both dogs and believe me it looks like a pharmacy, but Gayla was undeterred, we went over the good manners that Guy Man came with, and the not so good manners that Charlotte came with. She was undeterred, we are blessed as a village, and these dogs are blessed as well to have a person who is so generous to open her heart and home to adopt dogs like these two that had a very small shot at someone saying yes regardless of their issues..

Off they ride into the sunset with their names staying the same, Charlotte and Guy Man living the dream.

Gayla says she will update us regularly and I know everyone will be waiting, and watching. It most certainly has bee a very Good Friday indeed.

Mabel has inspired the name that I’ve chosen for this red bear and I think those of you that saw her Halloween video might remember and have a chuckle.

Sometimes we just have a run on bad luck for some of our rescues, sometimes we come across a diagnosis that is so far out in left field that the specialists say wow we’ve never seen that or that’s really rare.

Guy Man has some growths on his underside that we had biopsied and they came back benign. Problem is the dermatologist Dr Crow said they come back as benign but he’s positive that they are something far worse that always comes back as benign.

Guy Man has something called nodular derma fibrosis. What that means is it’s a genetic disorder typically found in German Shepard’s and will result in the dog dying from kidney cancer or smooth muscle cancer.

The problem gets more complicated, Guy Man has no symptoms of being sick, his bloodwork is normal, we had an ultrasound done on him which didn’t show anything on his kidneys but we cannot estimate what will happen to him. Dr Crow said he saw this in a Labrador one time and he lived for 7 years before succumbing to cancer, will Guy Man be lucky like this? We have no idea and nobody can predict this.

So here we are with the wonderful lovely Guy Man who will still need a home of his own regardless of this diagnosis, regardless of estimations, or prognosis’s

This is precisely what Hercules was here to teach us, all of us… do not predict or estimate, just live your life.

Guy Man intends to do just that and we’re hoping a family out there will adopt him feeling the same.

Guy Man, is a perfect gentleman, he is good with all dogs, he is housebroken, he is wonderful with all people, he does like to play with other dogs but he is a fabulous fella.