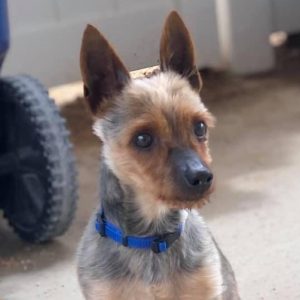 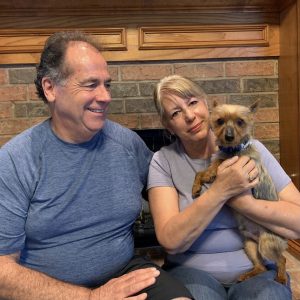 Village – Come in….Can you hear me?

Han Solo reporting…. Explorations continue…..I have discovered a new planet….
It is called…..

Today was the day for Han Solo to have his happily ever after and move from Foster Planet to his new Home Planet. Michelle and Randy Popiel, from Grapevine, TX, are experienced Yorkie owners and have a history working with rescues. They saw Han Solo’s story and decided that he should be part of their little family. The Popiel’s are retired and he will have new adventures traveling with them in their RV. He will also have new brother, a 10 year old dachshund named Rudy, to show him the ropes.

This fearful little guy looked so comfortable with his new family and they are clearly the perfect fit. As fate would have it, the Popiel’s had a Yorkie in the past named Chuy, so Han Solo will be keeping his name to go along with the theme!

They will be heading over to the Happy Tails page to give us updates of Han Solo’s adventures.

This little guy has come so far and we wish him the very best! Happy life little man!!

About Han Solo:
We were asked once again if we could take in two breeder releases from the same breeder that brought us Snap Crackle and Pop. We said we would be happy to help. We had no idea what dogs we would get but Cassandra went and picked them up yesterday.
This little boy is a Yorkie, although he has been shaved down. He is terrified and will slightly approach for attention. He will need help with learning how to live outside of a cage and we are happy to do that.

UPDATE 6/1/2021
Han Solo is coming out of his shell and playing with toys. It’s a big deal for him to keep playing when his foster mom Delzy’s dog comes in.

UPDATE 5/27/2021
This little shy man now is now in his foster home.  He played a little tug today with his foster mom. This is a very big stride for a terrified dog. He’s going to be okay he just needs time and patience.

We don’t have a home for this little guy and are currently looking for applications that will understand he needs a home who understands the help he needs with feeling safe.

UPDATE 5/16/2021
Let’s check in on the continuing sage of Han Solo:
Episode III: Portals
Han Solo reporting – I’ve been on Foster planet for 2 weeks now. I am all good with the local wildlife. We have had no issues at all.
The humans continue to offer nice accommodations but I am still timid with them. I’m making progress every day and my Foster mom says she sees my wheels turning, whatever that means.
Portals are a challenge for me. I do well going through the portal from Foster planet to the Green planet (house to yard) and out of the Millennium Falcon onto Foster planet (his room to main rooms), but going in is difficult. There are a lot of starts and stops but I eventually make it through.
I know do require a lot of patience and I haven’t quite gotten the idea of going outside to potty. I am food motivated though and I really like my meals.
I have found a couple of things I really enjoy, other than food. Napping on a big dog bed is quite nice and I really love lounging in the sun on Green planet.

Until my next report.. Han Solo – over and out

UPDATE 5/11/2021
Hi! Han Solo here! For those of you who missed my last post, here is a recap:
I went to the peach harvest and my assumptions were correct. It was definitely an alien planet and it was incredibly hostile territory. I don’t plan to return there and I have since returned to Foster Planet.
EPISODE II: The Wildlife
I have seen all of the local wildlife now. There are these things called cats. They look very cunning, they are bigger than me, and I just pay them no mind. I do sometimes feel like I’m being hunted by them though.
There are also dogs, or so they say. I can tell one is a dog. She is very big and playful but also nice. I think I like her. The other one they call a dog is most definitely NOT a dog. I’m very sure she is an alien life form. She is very loud and snorty and reminds me of Jaba the Hutt, but she is not mean and slimy like him , thank goodness.
I’ve also discovered dog beds and toys! I had a great time with a ladybug and a bee. I guess I like bugs.
The humans here treat me well. I still feel a little scared but when they get down on my level, I feel more comfortable. My sleeping accommodations are nice and my meal time is quite good, so I like that. Speaking of food, I’m off to dinner!

I’ll return soon to share more of my adventures on Foster Planet!

Poor little Han Solo was just so terrified at the sanctuary so our volunteer Delzy said she would take him home to help him feel more safe. Then she sent us this:
Hi guys! It’s me, Han Solo! Who better to check in on Star Wars Day?
I’ve recently moved from the Sanctuary to a Foster Planet in a galaxy far, far away. There are a lot of new smells and sounds here. I’ve checked out the Green Planet, they call a yard, and do my business out there. I haven’t soiled my sleeping quarters in the Millennium Falcon at all. I’ve met some new people and have accepted some petting. I even let Foster Mom pick me up today without running away. I’m still a little scared but I’m doing my best.
Tomorrow I go in for something they call a peach harvest. I’m not sure where that happens but I feel like it will be on an alien planet in hostile territory. I’m not looking forward to that.
When I return to the Foster Planet I plan to check out more of the terrain. I hear there is some local wildlife and some make noises like I would, such as barking, but others make this weird meow sound….
Stay tuned for my new adventures and May the Fourth be with you!