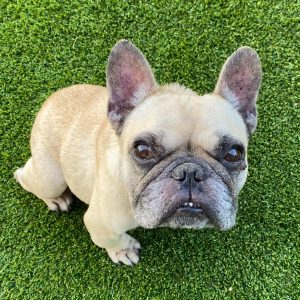 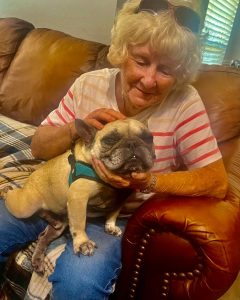 Little old man Hugo has been adopted! Susan Phelps and her sweet mom, Sharon, drove up from Temple, TX and it was love at first sight. Hugo will live with Sharon, her husband and a senior Shih Tzu named Boots. Sharon and her husband are retired and live a few doors down from their daughter. They have been looking for another senior dog to share their home with. Hugo will be a total lapdog. I already got an update with a picture of Susan checking on her parents and finding Hugo and her mom asleep in bed together. His name will stay Hugo and they promise to update us on the happy tails page
.
P.S. Grandma doesn’t miss him

About Hugo:
Another day another owner surrender.
This is a 9 year old boy with terrible skin as you can see. His owners are moving to Korea and cannot take him with them so he was surrendered to us today at the sanctuary.
He’s a very sweet old man who gets along with everyone and other dogs. He will be seen by Dr Reno asap to work on this skin but he got his first medicated bath as soon as he arrived.

Let’s peek in at Hugo at Amy’s house and see how Grandma is putting up with this old man in her home:
“Silly Hugo is doing great. He is definitely a lapdog and loves his humans. He has very little interest in playing with the other dogs, but gets along with all of them. He is infatuated with grandma to the point that he goes in her crate with her and also climbs in her dog bed

. He totally invades her personal space. According to grandma  the invasion is totally my fault. I get the grumpy Grandma looks on a daily basis. She tolerates him and they have formed a quirky little relationship. Although Hugo is a bit older, you would never know it. He is House trained and crate trained. I’ve had zero behavioral issues with him. I think he would do great with other dogs as long as they aren’t hyper and in his face.
I do think he enjoys their quiet company”

We need applications for old man Hugo, he will need a home of his own, and he appears to do quite well with other dogs, of course he doesn’t want to play with them but someone out there must be looking for an old man to just have some lap time. He’s a good boy.

Hugo is an old man and he can be a little grouchy with dogs that wiggle a bunch so Amy said let me take him home and foster him. Don’t forget Amy has grouchy old Grandma living with her…Whew let’s see how this goes.

Amy:
“Hugo in da house!!!! Zero issues with intros to my crew. He is not happy that I am ignoring him and won’t let him on the couch, but he needs to learn not to be bossy, resource guard and to just be a dog. After checking out the entire house, he immediately went to the dog room, checked out all the crates and claimed Grandma’s as his own

. That’s not going to work out well, but he does appear to like crates. He found out where the water was, took a drink and then went to the door and scratched on it to go outside. He’s very smart . He seems very happy and relaxed being in a home.”