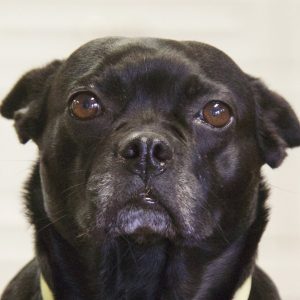 In May Jessica decided she wanted to take sweet Irene home with her to see how she behaves, how she is with three little girls and with a toddler. Jessica like all of us Eden’s will not tolerate a dog that doesn’t behave themselves and she reported to us that Irene was an angel at home. She loves the kids, and they love her. She kisses the baby in the face, and Mabel adores her. She turns on a dime with just a snap of your fingers and does anything and everything you tell her to do.

The more time that went by it became very clear to everyone involved that Irene was already home. Jessica loved her, Doug loved her, all the girls loved her and they felt that they couldn’t let her go. Travis was so very happy, he put his heart and soul into this dog and he needed her to stay in the family. He didn’t want to adopt another dog, his home is full so he knew that this was the best of both worlds.

It seems that Irene has come full circle and has landed back where she apparently has always belonged – with the Eden family and here at the Ranch. 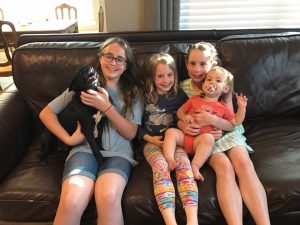 If you have been with our page for several years you will remember Irene. For those of you that haven’t let me tell you her story.

This was long before a rescue was ever formed here and we had just began to try and rescue a dog or two from a shelter and asked the followers of the page to help us pay the vetting bills. Irene was in the Fort Worth shelter in very bad shape, breasts filled with milk, completely emaciated with no pups that were ever found. She had been shot and the fragments are still inside her. She was the very first experience we had with treating heart worm and the time and expense it takes to rectify it.

I reached out to the followers of the page and at that time is was maybe 1,000 people to see if they would be willing to pay for this expense because otherwise we would not be able to help her. We were astonished by the support and in a matter of minutes even from that small of a group of people who followed our page the donations were made to pay for her treatment.
This was the very beginning of the village.

Irene needed months of rehabilitation, she slept for weeks and weeks trying to recover from her ordeal, and eventually she was fostered by Travis which was his first experience of doing this. To this day he will always tell you that she was his favorite foster.

After recovering from everything she was ready for adoption and a long time client of ours adopted her.

I want to stop right here in this story to tell you that this is going to be a story about Irene, but it’s also going to be a story about why situations with some dogs don’t work. My intention is not to point fingers and blame anyone involved. People do the best they can, they do what they know, and people have different strengths. Some people are soft with their dogs, they refer to them as their babies and they treat them as such, in turn problems arise and with that being said this is why we’re here today with Irene.

Irene was adopted 3 years ago she lives with Arlo the Springer Spaniel who is what I would called a dog with unbalanced energy and this can cause issues with other dogs. Irene lived with us and Travis at the Ranch for nearly 5 months and she has stayed with us multiple times since her adoption. We know Irene very well, we know who she is and what she does. With that being said problems started arising with her in her home years ago that we were not informed about, they quietly tried to work things out on their own and this did not work. Irene started to take control of her home and over a period of a couple of years she had become a behavior problem going after gardeners, pool men and even guests coming over to the home.

I would also like to stop right here and tell you that with 100% certainty she would never behave this way with us and she would never behave this way at Trav’s home because she knows immediately that this kind of thing would never be allowed. This kind of thing doesn’t happen immediately, it happens with baby steps, this tiny negative behavior is tolerated, and then the next, and then the next and after months and months of negative behavior being tolerated and allowed over and over again you have a dog that becomes a menace in their home.

This is precisely what Irene has done, she lives with people who love her very dearly, they are very sweet people who just want to love their dog but as we’ve discussed before love just isn’t what it’s cracked up to be and with all love and no rules you can create a monster.

Irene’s family reached out to us after a couple of years but we knew that this was not going to be solved in this home, too much water under the bridge and Irene had full control of the home. They had learned to adapt and manage and try and make things work but that isn’t what she needs.

They recently had a set of twins who are now toddling in the home and they just didn’t feel that they could continue with trying to live with this situation. We of course agreed and asked them to bring Irene back to the Ranch. Lots of tears were shed and they of course feel horrible but just like with Nassar she just wasn’t getting what she needs and now let’s discuss what that is.

Irene is a very sweet, calm girl, anyone who meets her will love her, nobody would suspect that a dog like her would take this kind of control which is precisely why this is a good way for people to educate themselves on how easy it is with allowing things to bit by bit escalate where you end up with a big problem on your hands.

One trainer that I worked with for years in southern California said it to me one time and I never forgot it, and that was “Dogs are excellent scorekeepers, every single time you allow them to get away with something you don’t want them to do, they add a point to their score”

Irene kept score and she came out victorious and sadly because of that she has found herself without one and looking for another.

Irene is approx 5 years old, she’s in great health she gets along with every dog and we think she’s a Boston Mix. She is not what I would call a behavioral challenge, but rather a dog that needs boundaries, and rules and an owner that will set those rules, stick to those rules, and help her understand that you are in charge. 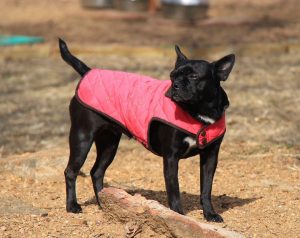 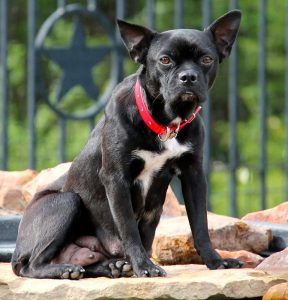 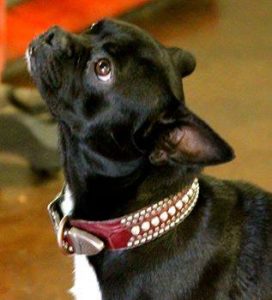